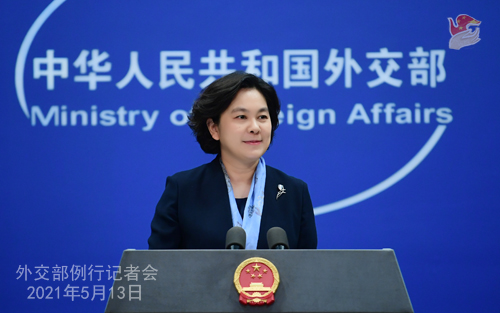 China has expressed strong dissatisfaction with and firm opposition to a virtual meeting on the so-called human rights situation in the Xinjiang Uygur autonomous region organized by the United States, the United Kingdom, Germany and several other countries.

The virtual meeting, which was "full of lies and disinformation", was an outright political farce that further exposed these countries' political attempt to use the region to create a mess and contain China's development, Foreign Ministry spokeswoman Hua Chunying said on Thursday.

"The pace of development in China and its Xinjiang will by no means be affected by this clumsy performance," Hua told reporters at a regular news briefing in Beijing.

She said that the false accusations made by the US and a few others against China "are nothing but a reflection of their own deplorable records on human rights issues".

"Instead of showing remorse on what they did both in history and in reality, these countries selectively ignored their own misdeeds and turned to criticize China with no good reason," she said, noting that it fully exposed their hypocrisy.

The spokeswoman said the participants in this event are all people and organizations that have long been engaged in anti-China activities.

For example, the "World Uyghur Congress" is an anti-China separatist organization, and its so-called president Dolkun Isa was a terrorist identified by the Chinese government.

The US and some other Western countries would rather cooperate with a few anti-China forces than acknowledge the basic facts of development in Xinjiang, which further exposes the hypocrisy of their so-called democracy and human rights, Hua said.

"We hope and believe that the international community will see through the nature of these people and will not be misled by those with ulterior motives," she added.

In a statement released on Wednesday, a spokesperson for China's Permanent Mission to the United Nations said that the side event was politically motivated and is resolutely rejected by the overwhelming majority of UN member states.

While the US and some other Western countries talk about so-called human rights issues in Xinjiang, they are actually thinking about using Xinjiang to contain China, the spokesperson said.

"They make a 'presumption of guilt' and then fabricate so-called evidence. This trick has been repeated so many times, and it's so obvious to everyone," the spokesperson added.

Thousands of terrorist attacks occurred in Xinjiang between 1990 and 2016, resulting in hundreds of deaths and thousands of injuries, the statement said.

"The US and some other countries did not care about human rights in Xinjiang back then and turned a blind eye to the terrorists' indiscriminate killing of innocents," the spokesperson said.

Thanks to China's efforts, there has been no terrorist incident in Xinjiang for more than four years, and people there enjoy safety, peace and stability.