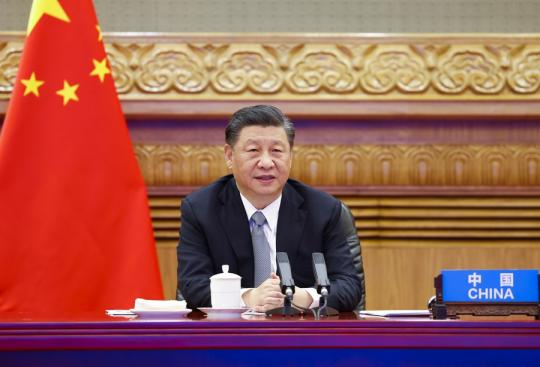 At the invitation of US President Joe Biden, President Xi Jinping attends the Leaders Summit on Climate via video link and delivers an important speech titled "For Man and Nature: Building a Community of Life Together" in Beijing, April 22, 2021. (Photo/Xinhua)

President Xi Jinping's speech on April 22 to the virtual Leaders Summit on Climate, hosted by the United States, was prudent and pertinent to engagement with environmentally accountable development.

It built on crucial environmental principles, including proportionality, responsibility and being precautionary, and further revitalized the ancient Chinese philosophy of the unity of nature and man and following nature's course. The ideology is engraved in Xi's government, through the Constitution and the master blueprint of national development, as an ecological civilization to be observed in all socioeconomic developments and political agendas.

Indeed, as countries aim for rapid industrialization after COVID-19, environmental sustainability is nonnegotiable. A compromise on its preservation has left the world grappling with the devastating impacts of climate change (droughts, heat waves, rising sea levels, flash floods and melting glaciers, among others).

Significantly, it would be promising to phase out coal investments to reduce carbon emissions, which pose a threat to the United Nations' Agenda 2030 for Sustainable Development, especially Goal 13 on climate action. This position is supported by President Xi's call for green development, showing China's commitment to peak carbon dioxide emissions before 2030 and achieve carbon neutrality by 2060.This is achievable, considering that in 2020, the country surpassed its climate targets, with carbon emissions per unit of GDP reduced by 48.4 percent from the 2005 level.

Intending to hold the global average temperature increase to well less than 2℃ above preindustrial levels, and to pursue efforts to limit it to 1.5℃, multilateralism is paramount.

Beijing has highlighted its willingness to work with the international community, including the United States, to jointly advance global environmental governance. This is not surprising, since it has cooperated before with several countries along the routes of the Belt and Road Initiative toward "greening "the initiative. For instance, through joint partnership, China established the Belt and Road Initiative International Green Development Coalition, which serves as a platform for BRI cooperation on green development. Under the platform, China has provided more than 2,000 training opportunities for environmental protection officials, experts and technicians from more than 120 participating countries.

As China looks forward to the 26th UN Conference of the Parties on Climate Change, or COP26, in Glasgow in November, its targets in raising global climate ambition on mitigation and adaptation offer its development partners, especially Africa, the opportunity to learn from the success of its policies and implementation, including the policy on Ecological Conservation Red Line of the Ministry of Ecology and Environment. This framework has enhanced land use planning, making China the largest contributor to the greening of the global landscape between 2000 and 2017, covering more than a quarter of the newly added green space in the world.

However, moderation should be exercised while borrowing from these policies, based on the unique histories and challenges encountered by different countries.

China's support of Africa's endeavor toward green, low-carbon and sustainable development, through the Forum on China-Africa Cooperation's Beijing Action Plan (2019-21), is a strategy that should be considered by other developed countries in supporting developing nations in the mitigation of and adaptation to climate change.

The implementation of the UN Framework Convention on Climate Change and the Paris Agreement on climate should be a priority, because they are sacred in climate governance. It would be great for the COP26 to provide a window for negotiating the setting of a new collective quantified goal on climate finance to mobilize funds from developed countries for extensive climate action.

Climate change is undeniably an environmental challenge that, if left unchecked, would culminate in an interconnected, long-term driver of insecurity such as resource scarcity, loss of infrastructure and mass displacement of people. Consequently, it is necessary for countries, policy stakeholders, companies, organizations and individuals to jointly commit to sustainable development, creating a balance between environmental conservation and socioeconomic development.

The author is the director for the Centre for Displacement and Humanitarian Policy at the Kenya-based Africa Policy Institute.