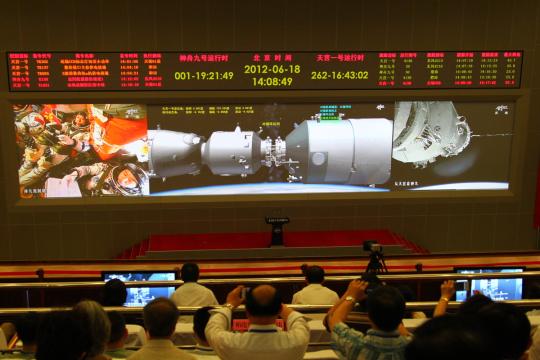 The Tiangong I space lab docks with the Shenzhou IX manned spacecraft as it is monitored at a control center in Beijing in 2012. （ZHA CHUNMING/XINHUA）

Though China launched the first module of its manned space station into orbit on Thursday, the nation has conducted a large amount of preparatory work and accumulated experience through two previous space laboratory missions.

China's first space lab - Tiangong I, which was regarded by foreign space observers as the nation's first prototype space station, was launched in September 2011 by a Long March 2F carrier rocket at Jiuquan Satellite Launch Center in northwestern China.

Meant to last two years, the spacecraft was actually in service for four and a half years before its retirement was announced by authorities in March 2016.

During its operation, the 8.5-metric-ton space lab, about the size of a school bus, served as both a manned laboratory and an experimental test bed to demonstrate orbital rendezvous and docking technologies.

The country's second woman in space, Wang Yaping, also spent time in the lab during the Shenzhou X mission. From the lab, she gave a 40-minute televised science lecture that was watched by more than 60 million Chinese students from about 80,000 schools.

The lab reentered Earth's atmosphere before breaking apart in a fireball over the South Pacific Ocean in April 2018.

China's second space lab, Tiangong II, was put into orbit in September 2016 atop a Long March 2F rocket from the Jiuquan center. It was the same size as Tiangong I and weighed 8.6 tons.

It carried two Chinese astronauts from the Shenzhou XI mission in October and November 2016.

More than 1,000 days into its orbit 393 kilometers above the ground, the lab substantially outlived its two-year designed life span and completed all of its assigned tasks.

During its stay in orbit, Tiangong II carried out four dockings with the Shenzhou XI manned spacecraft and Tianzhou 1 cargo spaceship, enabled engineers to verify a series of key technologies such as midterm life support and in-orbit refueling, and executed multiple extended experiments.

It carried about 600 kilograms of scientific payloads and conducted more than 60 experiments and technology tests.

Tiangong II reentered the atmosphere in July 2019, with some debris falling into the South Pacific Ocean.

The China Manned Space Agency said the Tiangong I and II labs helped it gain significant experience for the construction and operation of the country's future space station.