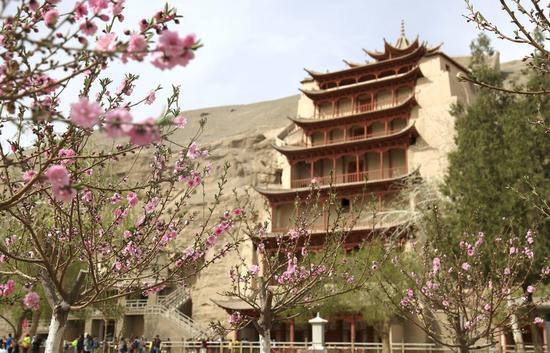 A digital donor project to help protect cave No. 55 at the Mogao Grottoes raised over 1.9 million yuan (about 290,000 U.S. dollars) by the end of March, according to a Wednesday report by China Daily.

Initiated in 2018, the crowdfunding program enables people to donate 0.9 yuan on WeChat after watching a short video about the history of the cave, which is one of the Buddhist art treasures at the world-famous site.

The program has encouraged the public, especially youth, to learn about the relics and help in their protection, Yang Xiuqing, director of the China Dunhuang Grottoes Conservation Research Foundation and also an initiator of the project, was quoted as saying by the newspaper.

The Mogao Grottoes, with numerous ancient murals and Buddhist statues in 735 caves, have faced challenges due to natural erosion and human intrusion.

"Though the country is increasing preservation investment, the protection work needs the participation of more people," Yang said, adding the success of the program showed the growing interest of young people in Dunhuang culture.

"Now, we hope to cultivate the new generation of digital donators to help the relics survive another 1,000 years," Yang added.

Another crowdfunding project for cave No. 427 was also launched recently and has already received 100,000 yuan from one group.