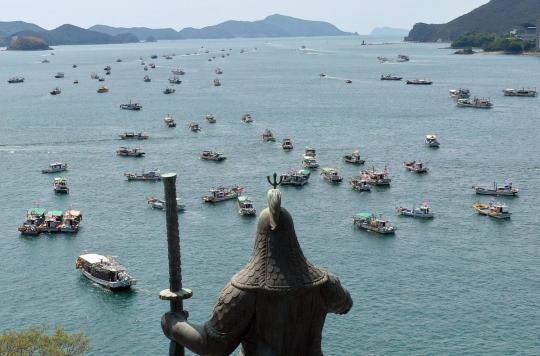 South Korean fishing boats converge off Tongyeong, South Gyeongsang, on Monday in a protest against Japan's decision to dump contaminated water into the sea.(Photo/Agencies)

A decision by Japan to dump contaminated water from the crippled Fukushima nuclear plant into the sea is generating growing anger in Southeast Asia.

While international outrage over Japan's plan has focused mostly on the fears of people in China and South Korea, awareness of the dangers posed by the release of more than 1 million of tonnes of the contaminated water is mounting farther south.

Commentators across Southeast Asia are highlighting the threat to coastal communities and marine biodiversity.

Renato Redentor Constantino, executive director of the Institute for Climate and Sustainable Cities think tank in Manila, said all Japan's neighbors are at risk from the discharge.

Serina Abdul Rahman, a visiting fellow at ISEAS-Yusof Ishak Institute in Singapore, said the move will harm not only the marine environment but also migratory birds and other animals. This is aside from the threat to public health from contaminated seafood. Fishing communities also will lose their livelihoods.

Serina said that while there may not be an immediate impact to Southeast Asia's seas from the water, long-term consequences are likely given the interconnectedness of the global water systems. "The seas are a fluid environment that cannot be bordered up by any means," Serina said.

"With extreme weather conditions, that we get more frequently now, anything in the sediment and substrate can get churned up and flow with the currents."

A conservation scientist and environmental anthropologist, Serina has worked with a Malaysian fishing community for more than a decade. As such, she is also concerned about the effects on the marine food chain and broader public health.

Japanese Prime Minister Yoshihide Suga said on April 13 that his government had decided to go ahead with the long-discussed proposal to discharge the contaminated water into the sea. The government said the water would first be treated using an advanced liquid processing system to remove most contaminants. But substances like tritium, a radioactive byproduct of nuclear reactors, are proving hard to filter out.

The decision drew a swift response from China. Foreign Ministry spokesman Zhao Lijian urged Japan to reconsider its plan and cooperate with other countries to conduct assessments on the water at the Fukushima Daiichi plant.

On Monday, Chinese Foreign Ministry spokesman Wang Wenbin said that experts from China will be invited to join a technical working group led by the International Atomic Energy Agency, or IAEA, that will look into Japan's contaminated water disposal plan.

"China is in close communication and coordination with the IAEA over the issue," Wang said, adding China will fully support the nuclear agency's follow-up work.

The nuclear plant was damaged by the earthquake and tsunami that struck Japan in March 2011.

In another reflection of the concerns in East Asia, Philippine Presidential spokesman Harry Roque reminded Japan of "the principles of international environmental law" with which he hopes "all countries comply".

Southeast Asia has one of the world's most diverse marine ecosystems. A thriving fisheries industry accounts for roughly 25 percent of global fish production.

Riko Kurniawan, director of the Riau provincial office of the Indonesian Forum for the Environment, has called on the Indonesian government to provide more information on the dumping plans.