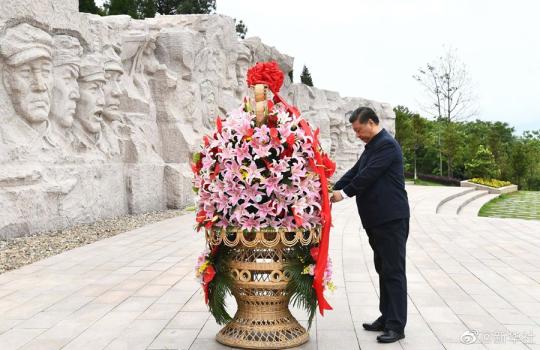 Xi Jinping, general secretary of the Communist Party of China Central Committee, places a flower basket at a memorial park dedicated to the Battle of the Xiangjiang River during the Long March in the 1930s in Caiwan, a town in Quanzhou County in the city of Guilin in South China's Guangxi Zhuang autonomous region, on April 25, 2021. (Photo/Xinhua)

President Xi Jinping has underlined the importance of staying firm to ideals and convictions as China is striving to build a modern socialist country and to realize national rejuvenation.

Xi, who is also general secretary of the Communist Party of China Central Committee and chairman of the Central Military Commission, made the remark on Sunday during his inspection tour of the Guangxi Zhuang autonomous region.

Xi visited a memorial park in the city of Guilin dedicated to the Battle of Xiangjiang River during the Long March in the 1930s.

He presented a flower basket in homage to Red Army soldiers who died in the battle. He also visited a memorial hall in the park to pay his respects to revolutionary martyrs.

Xi said the Xiangjiang battle was a heroic battle of the Long March and an important historical event that determined the "life or death" of the Chinese revolution.

Red Army soldiers remained fearless in the face of death, with strong ideals and convictions, he said.

The secret to the success of the Chinese revolution is that the revolutionary ideals soared above the clouds and the soldiers stayed firm in the most difficult times, so as to continuously achieve miraculous victories, he said.

In the face of even greater difficulty, one should think about the Long March and the Xiangjiang battle, Xi said, noting that the revolutionary beliefs should be carried forward.

As this year marks the 100th anniversary of the CPC's founding, Xi has highlighted the significance of drawing strength from the past through Party history learning and education.

In recent years during his inspection tours, Xi has visited several historical sites in memory of the Long March.

He visited Zunyi, Guizhou province, in 2015, the year that marked the 80th anniversary of the Zunyi Conference, a historic Party meeting that was regarded as a crucial turning point leading to the ultimate success of the Chinese revolution.

As 2016 marked the 80th anniversary of the victory of the Long March, Xi visited a monument honoring the revolutionary martyrs' sacrifice, during his inspection tour in the Ningxia Hui autonomous region, and called for efforts to realize the Chinese dream in "a new Long March".

Later on his Sunday trip in Guilin, Xi went to the village of Maozhushan, where he inspected progress in promoting rural vitalization and grassroots-level governance.

The village has managed to eliminate poverty by developing the grape industry in recent years, with an average output of more than 500 metric tons of grapes annually.

On Sunday afternoon, Xi also visited a section of the Lijiang River, which he described as "the one-and-only treasure of China and the world".

After learning about local efforts in ecological conservation, Xi said that quarrying creates the worst damage to the environment, and he called for efforts to protect the environment and to crack down on illegal quarrying of stone and sand.