FM: U.S. 'has not found right way to engage with China' 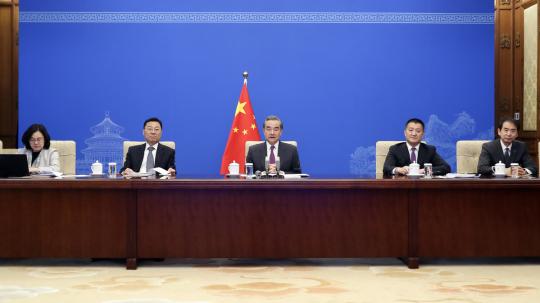 Both Vice-President Wang Qishan and State Councilor and Foreign Minister Wang Yi called for stepping up dialogue, deepening cooperation and managing differences in speeches on Saturday and Friday night, respectively.

Observers noted that the two speeches were made amid tension between the two largest economies in the world over a range of topics, such as human rights and the Taiwan question, and Washington has underlined the competitive side of the relations.

During a virtual dialogue on Friday with the U.S. foreign policy think tank Council on Foreign Relations, Wang Yi noted that U.S. President Joe Biden's administration has named China the "most serious competitor" of the U.S..

When shaping its China policy, Washington "has not gotten out of the shadow of the previous administration, has not got over its misperception of China, and has not found the right way to engage with China", said Wang.

In his five-point advice for handling China-U.S. relations at a strategic height, the foreign minister prioritized viewing China's development in an objective and rational way.

"The wisdom from China's millennia of history is that hegemony will lead to failure, and that a strong country should not seek hegemony," he said.

He made strong rebuttals to some typical, viral allegations, such as the claim that China does not respect the U.S. anymore.

The foreign minister said "it is China that values mutual respect and equality the most" and "respect is to be earned with hard work, be it a country or a person".

Responding to accusations that China embarks on "coercive diplomacy", Wang said China in history fell prey to foreign coercion, its foreign policy consistently treats all countries as equals regardless of their size, it does not act in a coercive way, and it "firmly opposes any country doing so".

While U.S. officials, including Secretary of State Antony Blinken, have publicly said one should never "bet against America", Wang responded by saying that "China welcomes early progress in COVID-19 response and full economic recovery in the U.S." and "the U.S. needs to stay confident, rather than suspicious".

Since the White House recently defined China-U.S. ties using words such as competition, cooperation and confrontation, Wang Yi said the definition ignores the differences between the major and minor factors and shows "a lack of a clear direction and goal".

China has no intention to compete with the U.S., and a heightened confrontation "only leads to a lose-lose situation", he said, adding that both countries should work harder together on the COVID-19 response, climate change and economic recovery.

Urging the U.S. to respect the path and social system that China adopts, Wang said it is "undemocratic in itself" to label China as "authoritarian" or "a dictatorship" simply because China's democracy takes a different form than that of the U.S..

"Democracy is not Coca-Cola, which, with the syrup produced by the U.S., tastes the same across the world," he said, adding that conducting values-oriented diplomacy and meddling in other countries' internal affairs will only lead to turmoil or even disaster.

Speaking against inference in China's affairs, Wang said that playing the "Taiwan card" is dangerous and like playing with fire.

The reunification is a historical trend, and the U.S. should not send any wrong signals to "Taiwan independence" elements, he said.