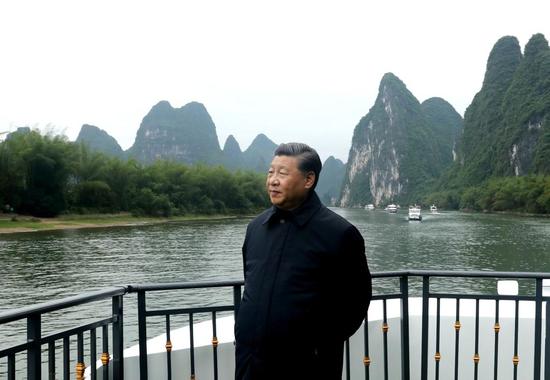 Xi Jinping visits a section of the Lijiang River and learns about local efforts in the ecological conservation of the river in Yangshuo, south China's Guangxi Zhuang Autonomous Region, April 25, 2021. (Xinhua/Ju Peng)

In the morning, Xi went to Caiwan, a town in Quanzhou County in the city of Guilin.

Xi visited a memorial park dedicated to the Battle of the Xiangjiang River during the Long March in the 1930s, and laid a flower basket in homage to Red Army soldiers who died in the battle.

He also visited a memorial hall in the park to pay respect to revolutionary martyrs.

Xi then went to the village of Maozhushan, where he inspected progress in promoting rural vitalization and grassroots-level governance.

In the afternoon, Xi visited a section of the Lijiang River, where he learned about local efforts in the ecological conservation of the river.