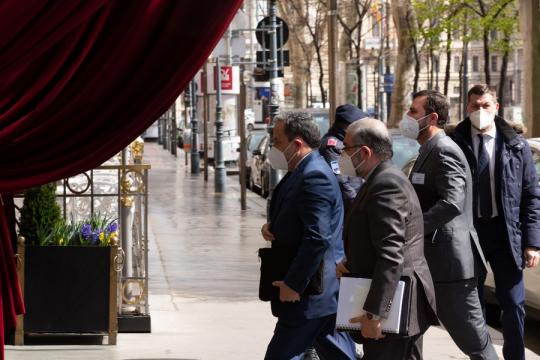 Iranian Deputy Foreign Minister Abbas Araqchi said Tuesday that the latest round of the talks in Vienna are "progressive" despite "the existing difficulties."

Diplomatic efforts continued on Tuesday in Vienna to restore the 2015 nuclear accord, known as the Joint Comprehensive Plan of Action (JCPOA), with lifting sanctions and nuclear issues topping the agenda.

After discussions with representatives from other signatories of the JCPOA, namely Britain, China, France, Russia and Germany, Araqchi said that Tehran will stop the negotiations whenever the talks move toward "excessive demands, wasting time and irrational bargaining," cited by Iranian news network Press TV.

"I continue to think that diplomacy is only way forward for the #JCPOA to address ongoing challenges," Mora added.

Iran gradually stopped implementing parts of its commitments in May 2019, one year after the administration of former U.S. President Donald Trump unilaterally abandoned the agreement and re-imposed sanctions on Iran.