Lam: Worst time for HK over 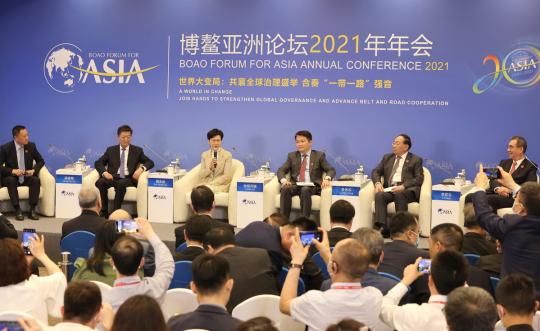 Hong Kong Special Administrative Region Chief Executive Carrie Lam Cheng Yuet-ngor told the Boao Forum for Asia that the worst time for the Hong Kong economy is over, and it will strive for closer collaboration with the Chinese mainland through the development of the Guangdong-Hong Kong-Macao Greater Bay Area and the Hainan Free Trade Port.

The forum opened on Tuesday in China's southern Hainan province.

Speaking on Bay Area development, Lam said Hong Kong had experienced chaos and setbacks since 2019, but that time is over. She said she believed the financial center, with a strong performance in the equity market last year, will post GDP growth of 3 to 5 percent this year.

Hong Kong can give full play to its leading capability in scientific research and mature intellectual property protection system, combining them with the mass markets and strong manufacturing capacity in Guangdong province, she said.

However, Lam stressed that the Bay Area still faces challenges in the circulation of elements that are needed in technological innovation, as well as in attracting scientific research talent.

Expressing confidence in the prosperous development of the 11-city cluster, Lam said that Hong Kong and Shenzhen have proposed policies to attract overseas talent to settle down in the Bay Area.

Positive developments could not be achieved without social stability, which stemmed from two important decisions made by the nation's top legislature in the past year-the National Security Law and the changes to Hong Kong's electoral system, she said.

In an interview with China Global Television Network, Lam said Hong Kong has seen obvious changes under the city's National Security Law, which was enacted in June.

"We have now seen stability," she said. "We have now seen Hong Kong people recovering that freedom to speak their mind, to go out and to just forget about all the chaos that has haunted the city for almost a year since the latter half of 2019."

In her view, these are "changes for the better, especially for overseas investors".

During the forum, Lam also met with Shen Xiaoming, Party chief of Hainan province. She pointed out that Hong Kong and Hainan both occupy important positions in the country's "dual circulation", which emphasizes the development of domestic and international markets.

She suggested both sides focus on complementary and coordinated development, and continue expanding areas of cooperation, including industrial collaboration, youth employment and exchange programs.

Shen said he expects the two places to enhance cooperation in areas including professional services, aviation and healthcare. He also welcomed youth from Hong Kong to study and work in Hainan.