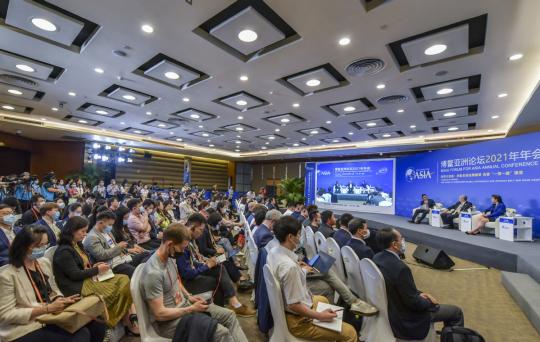 Participants attend a panel discussion on digital payment and currency during the Boao Forum for Asia Annual Conference 2021 in Hainan province on Sunday. （Photo by Luo Yunfei/China News Service）

Regulations on privately created cryptocurrencies to be tightened

China will further expand trials of e-CNY, the digital currency floated by the People's Bank of China, the central bank, and tighten regulations on privately-created cryptocurrencies, such as Bitcoin and Stablecoin, according to officials and experts.

Bitcoin is a digital or virtual currency that uses peer-to-peer technology to facilitate instant payments, while Stablecoin is a cryptocurrency where the value is tied to an outside asset, such as the dollar or gold.

China considers Bitcoin and Stablecoin as cryptoassets, which means they are not seen as real currencies, but only as investment assets. The nation is planning to improve the regulatory environment for these alternative investments, to ensure that speculative activity will not result in serious financial risks, said PBOC Vice-Governor Li Bo.

"Before the launch of any regulatory measures, we will maintain what we are doing right now," Li said during a session discussion of the Boao Forum for Asia Annual Conference 2021.

Zhou Xiaochuan, former governor of the central bank, said the financial sector should continue to serve the real economy.

"Whether it is a digital currency or a digital asset, it should closely integrate with and serve the real economy," Zhou said.

Zhou also said that digital currency could benefit the real economy and support a large number of payments.

The Bitcoin fell by as much as 15 percent on Sunday with rival coins like Ether and XRP also losing sheen. The retreat came after Bitcoin hit a record high of more than $64,000 on Wednesday. On early Monday, the Bitcoin was trading in Asia at around $57,000, which was still down about 12 percent from last week's intraday peak.

Though financial regulators have expressed concern about cryptocurrencies, they are promoting the launch of the central bank digital currency. According to Li, authorities are planning to expand trials of the digital yuan, or e-CNY, in more cities and for various scenarios.

"For example, in the pilot program of 2022 Beijing Winter Olympics, the digital yuan will not only be offered to domestic users, but also for international users," said Li.

In addition, China is finding ways to exchange of various digital currencies issued by world's leading central banks, which is a complicated issue. "We are not in a hurry to find a solution. We are choosing different options to experiment with various technologies. We are open-minded. The goal is to build a very solid domestic digital yuan and a healthy ecosystem," Li added.