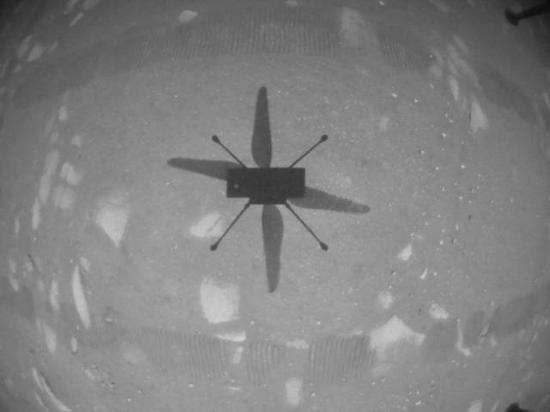 NASA launched its Mars helicopter Ingenuity from the surface of the Red Planet earlier Monday, marking the first powered, controlled flight of an aircraft on another planet.

The Ingenuity team confirmed the flight succeeded after receiving data from the helicopter via NASA's Perseverance Mars rover at 6:46 a.m. EDT.

Altimeter data indicates that Ingenuity climbed to its prescribed maximum altitude of three meters and maintained a stable hover for 30 seconds, according to NASA.

It then descended, touching back down on the surface of Mars after logging a total of 39.1 seconds of flight.

NASA revealed a first black-and-white image taken by Ingenuity from the air while hovering over the Martian surface, using its navigation camera which autonomously tracks the ground during flight.

"The Mars Helicopter project has gone from 'blue sky' feasibility study to workable engineering concept to achieving the first flight on another world in a little over six years," said Michael Watkins, director of NASA's Jet Propulsion Laboratory in Southern California.

"That this project has achieved such a historic first is testimony to the innovation and doggedness of our team here at JPL, as well as at NASA's Langley and Ames Research Centers, and our industry partners. It's a shining example of the kind of technology push that thrives at JPL and fits well with NASA's exploration goals," he said.

Ingenuity arrived at Mars' Jezero Crater on Feb. 18, attached to the belly of NASA's Perseverance rover. The helicopter is a technology demonstration with a planned test flight duration of up to 30 Martian days.

Deployed to the surface of Jezero Crater on April 3, Ingenuity is currently on the 16th Martian day, of its 30 Martian days flight test window.

Over the next three Martian days, the helicopter team will receive and analyze all data and imagery from the test and formulate a plan for the second experimental test flight, scheduled for no earlier than April 22. If the helicopter survives the second flight test, the Ingenuity team will consider how best to expand the flight profile.

NASA will gain its first hands-on experience operating a rotorcraft remotely at Mars. These datasets will be invaluable for potential future Mars missions that could enlist next-generation helicopters to add an aerial dimension to their explorations, according to the agency.