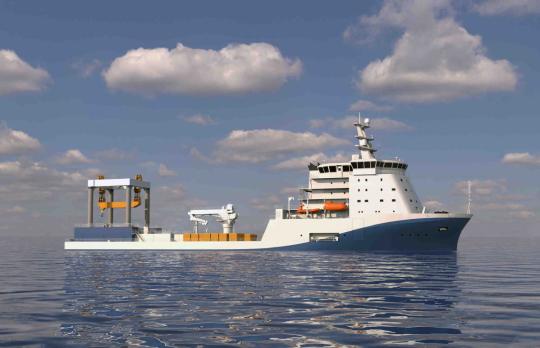 An artist's impression of China's largest marine research ship ahead of its construction.

The vessel, which has yet to be named, will be built at Guangzhou Shipyard International in Guangdong province. Once completed, the ship will be delivered to the Guangdong Institute of Intelligent Unmanned System, it said in a statement.

Developed by the Marine Design and Research Institute in Shanghai, the ship will be 117.2 meters long and 21 meters wide and will have a full-load displacement of 10,100 metric tons.

It will be able to carry more than 600 tons of scientific equipment, according to Wei Zhiyuan, its chief designer.

The vessel will be equipped with multiple marine survey instruments such as a conductivity-temperature-depth sensor and depth finder to carry out scientific tasks. It will also have space and adapters for extra research devices, Wei said.

He said the ship will have a low-noise propulsion system and a high-safety hull.

"The ship's construction will start in the coming months and will take about two years," Wei said.

"It will be capable of conducting scientific operations in any waters around the world except the polar regions."

Cui Yiliang, editor-in-chief of Modern Ships magazine, said the design and construction of sophisticated research ships requires advanced technologies and shipbuilding expertise, adding that only a small number of countries are able to make such vessels.

China now operates more than 50 research ships, with most under the State Oceanic Administration.

The largest operating research vessel in the country is the 5,000-ton Dongfanghong 3 operated by the Ocean University of China in Qingdao, Shandong province.

The ship was built by Jiangnan Shipyard in Shanghai, another subsidiary of China State Shipbuilding Corp.

Jiangnan Shipyard is now constructing Sun Yat-sen, which will become the nation's largest research vessel until the new ship's commissioning.

Named after a great revolutionary and statesman, Sun Yat-sen will be 114.3 meters long and will displace 6,800 tons.

It is scheduled to be finished before the end of this year. It will be owned by Sun Yat-sen University in Guangzhou and be used to carry out scientific expeditions and student training.

China is on a fast track toward its goal of being a strong power in terms of marine exploration and utilization.

The nation has invested a great amount of resources to establish its marine research capability and has made remarkable achievements, including using a domestically developed submersible to explore the deepest part of the oceans — the bottom of the Mariana Trench — last year.