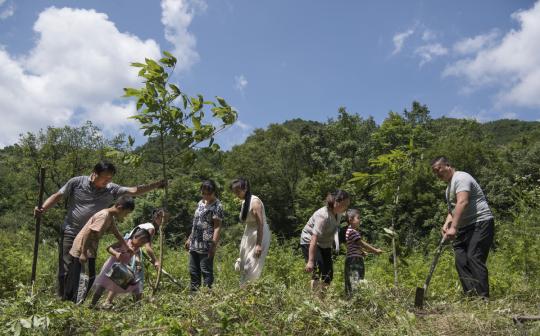 As Friday marks the country's 43th Three Planting Day, the National Greening Commission released a report, which showed that 82,700 hectares of farmland and more than 1.68 million hectares of pastures had been turned into forest or grassland within the last year.

Currently, the green area per capita in urban areas in China is 14.8 square meters on average. And 441 cities have joined in the campaign to build national forest cities by multiple greening methods.

Moreover, last year the country initiated its first pilot program to construct grassland natural parks, with 39 pilots having been launched covering a total of 147,000 hectares of grassland in 11 provinces and autonomous regions.

Greening has not only improved the country's environment but also benefited its people.

The report said more than 3 million people had been lifted out of poverty thanks to the green industry. And currently, more than 1.1 million people are employed as environmental conservationists and had their living conditions largely improved.