Ministry bans smartphones in all schools 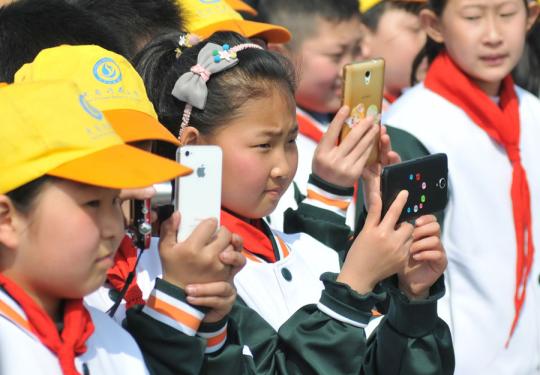 Notice says widespread use has been a hindrance to effective management

All primary and secondary school students in China will, in principle, be barred from bringing mobile phones to school, the Ministry of Education announced on Monday.

The new measure, aimed at protecting students' eyesight, making sure they focus on study and preventing them from becoming addicted to the internet and online games, has sparked heated debate among parents over the practicality of implementation and the need to keep their children up to pace with phone-centered technological advances in everyday life.

When Dai Hanyang was in middle school, his head teacher brought a hammer to school to enforce a cellphone ban.

"Seeing him using it to smash a classmate's mobile phone really let us know that he meant business," Dai said.

The 17-year-old, now a high school student in Changsha, Hunan province, said his school does not allow students to bring cellphones to campus and he never does.

"I am not good at self-discipline and I could not help but check WeChat messages or moments, so not having my cellphone with me helps me focus on studying," he said.

Teachers will confiscate students' mobile phones if they are caught playing with them during class and they are only returned after the semester ends, he said.

Parents will now need to submit a written application if their child needs to bring a mobile phone to school, the ministry said in a notice issued on Monday. In such cases the student should hand the cellphone to the school for custody during school time, it added.

No cellphones will be allowed in classrooms, the notice said.

Schools should not assign or ask students to do homework via cellphones and they should set up public phones and teacher hotlines for communication between parents and students, it added.

Zheng Rui, a high school student in Changsha, said mobile phones are also not allowed in his school. While he leaves his cellphone at home, some of his classmates still bring them to classrooms and find all kinds of ways to evade teachers' supervision, he said.

"Some of my classmates have become addicted to cellphones and it has affected their study," the 17-year-old said.

Zhang Ting, the mother of a fourth grader in Beijing, said she supports the ban on students using mobile phones at schools.

"My daughter's school does not allow it, I do not allow it, and my 10-year-old daughter does not ask for a cellphone," she said, adding that a smartwatch is more than enough for communication.

For primary school students, the knowledge found in books is enough, she added.

Nowadays, information is being carried on digital channels, but the content remains the same, Zhang said. Fragmented and overloaded information online is no better than knowledge gained from books, she said.

Once her daughter becomes mature enough to tell right from wrong, she will be ready to deal with the information online, she added.

Zhang Hengzhu, principal of Nanjing No 9 Middle School in Jiangsu's provincial capital, said the misuse of mobile phones can bring a series of health problems, including memory loss, sleep disorder and deteriorating eyesight.

Parents have an important role to play in guiding students to properly use cellphones and prevent them from becoming addicted, he said.

Liu Changhai, professor of education at Huazhong University of Science and Technology in Wuhan, Hubei province, said some parents have used cellphones as "free nannies" during summer and winter vacations and have not limited the time their children can spend using them.

They should set out rules about when and how long their children can use mobile phones and prevent them from overusing them, he said.