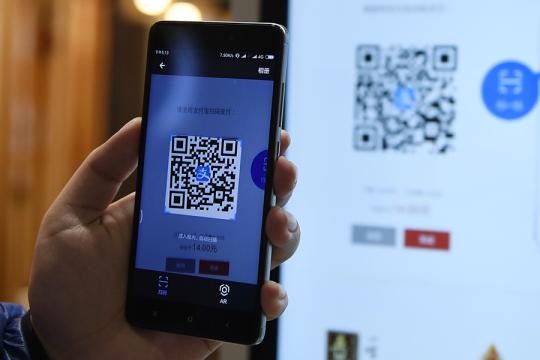 A consumer scans an Alipay QR code to pay for the order at a self-service restaurant in Hangzhou, Zhejiang province. (Photo/Xinhua)

The president said in the order that the apps can access private information from their users. That information could be used to "track the locations of Federal employees and contractors, and build dossiers of personal information", he said.

The order instructs Commerce Secretary Wilbur Ross to evaluate other apps that could pose a "national security threat".

The Trump administration has targeted Chinese-owned social media applications, claiming that they pose a national security risk to the American public.

Both orders have faced legal challenges. The order banning downloads of WeChat in the U.S. was blocked by a federal judge in September shortly after it was scheduled to take effect.

Two federal judges also separately blocked the order concerning TikTok, which would have restricted American transactions with TikTok, effectively banning the app in the U.S..

Thanks to the courts' ruling, both apps continue to operate in the U.S. now. The Trump administration has sought to overturn the rulings.

Trump's latest ban on Chinese apps has drawn immediate reaction from Chinese communities in the U.S.. At an online forum of WenxueCity, a website for Chinese living in the U.S., some users expressed doubt that the order would go into effect because TikTok and WeChat still operate.

"To U.S. businesses, it's a stupid move to ban an app that allows Chinese to spend more in the U.S.," said another user.

WeChat is not only a communications tool but also a payment service. Following the WeChat executive order issued in August, U.S. companies that do business with China raised concerns that the ban would make them less competitive.

Alipay, owned by Chinese financial-technology giant Ant Group, has more than 1 billion users. Alipay and WeChat Pay are the two most popular payment apps, which jointly take 90 percent of China's mobile-payment market share as the daily app of Chinese consumers.

A large number of merchants in the U.S. have started to accept payments via Alipay, according to the company. In 2016, Alipay partnered with Uber to allow Chinese travelers to request and pay for rides from either the Uber or Alipay app.