Consumer spending to get boost in 2021, experts say 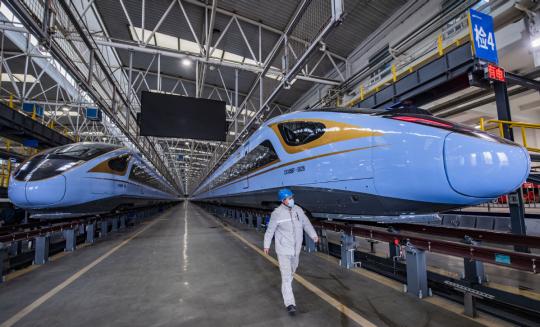 Two new models of the Fuxing high-speed train are parked at China State Railway Group Co's branch in Xi'an, Shaanxi province, on Tuesday. The trains will operate on the Yinchuan-Xi'an High-Speed Railway, which is scheduled to open on Dec 26. (Photo by Yuan Jingzhi/For China Daily)

Beijing is likely to prioritize boosting domestic demand and cementing the acceleration in consumer spending as it sets out the major economic tasks for 2021, officials and experts forecast on Tuesday.

Unlike the stimulus measures targeted at the property market in some previous economic cycles, the upcoming demand-side reform is supposed to roll out long-term mechanisms to expand the middle-income population, they said before a key economic meeting set to chart the course for next year.

"Insufficient domestic demand is still one of the main problems for policymakers. To expand demand and consumption, ensuring employment and creating more jobs will continue to be the top priorities of China's economic policies next year," said Xu Hongcai, deputy director of the China Association of Policy Science's economic policy committee.

Next year's policy will likely focus on spurring domestic consumption, raising the efficiency of investment and containing debt leverage and financial risks that could destabilize the country's economic recovery, Xu said.

The growth in retail sales, a key gauge of consumption, has recovered to the fastest level of the year at 5 percent year-on-year in November, compared with 4.3 percent the previous month, the National Bureau of Statistics said on Tuesday.

Nevertheless, retail sales for the January-November period saw a year-on-year decline of 4.8 percent, compared with 2.6 percent growth in fixed-asset investment, according to the bureau.

In light of the lagging recovery in consumption, officials and experts said policy measures focused on demand-side reform to boost consumer spending will come out soon, with the upcoming annual Central Economic Work Conference expected to give more details.

Policy plans to be rolled out at the conference have attracted much attention as they will decide how the world's second-largest economy will embark on its new five-year plan for social and economic development and the journey of fully building a modern socialist country.

"The country should build a complete system of domestic demand, expand domestic demand and extend the fundamental role of consumption," said Fu Linghui, an NBS spokesman, adding that domestic consumption will continue to be the main driver of the economy as it was prior to the COVID-19 pandemic.

The core leadership of the Communist Party of China, for the first time, raised the notion of demand-side reform on Friday, in pursuit of the "dual-circulation" development pattern, in which the domestic market is the mainstay while the domestic and foreign markets boost each other, Fu added.

While furthering supply-side structural reform, China will emphasize demand-side reform in the next year to create a higher-standard dynamic balance between supply and demand, according to a meeting on Friday of the Political Bureau of the CPC Central Committee.

The country will improve its tax, social security and transfer payment systems to expand the middle-income group and reduce the income gap, Finance Minister Liu Kun said in a recent article published on cntheory.com.

The fiscal system "has a big role to play" in strengthening domestic demand, Liu said, adding that it will also step up efforts to promote traditional and emerging forms of consumption and strengthen the policy framework of elderly care, healthcare and education services.

In the first 11 months of the year, fixed-asset investment in high-tech industries grew by 11.8 percent year-on-year, up from 9.7 percent in the January-October period, the NBS reported.

Wang Tao, chief China economist at global investment bank UBS, said she expected the country to increase spending on research and development and investment in key high-tech areas in the next year.

Buoyed by domestic consumption and exports, China's economic growth is expected to rebound to 8.2 percent in 2021. Because of that, supportive macro policies rolled out this year to cushion the economic impact of the COVID-19 pandemic will be retracted, Wang said.

"It needs to be an orderly policy exit to prevent the risk of a double-dip of the economy," said Xu, from the China Association of Policy Science, adding that monetary policy will remain flexible but extreme easing is unlikely while the country's budget deficit is not expected to rise next year.