Yutu 2 rover still operating on far side of moon 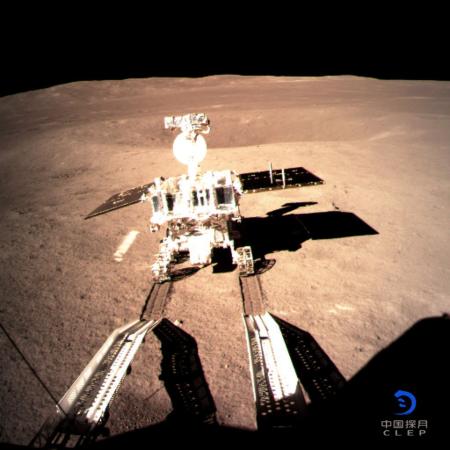 The Yutu 2 rover on the surface of the moon. (Provided to China Daily)

China's Yutu 2 rover has been operating on the lunar surface for 692 Earth days, cementing its status as the second-longest-working rover on the moon, the China National Space Administration said.

The second Chinese lunar rover, Yutu 2 is part of the ongoing Chang'e 4 mission, humanity's first endeavor to land on and closely observe the far side of the moon. The rover has traveled nearly 590 meters since it was deployed on Jan 3 last year.

The administration said Chang'e 4's lander and the rover have finished their 24th lunar-day working session and are now in a dormant state for the lunar night.

A lunar day equals 14 days on Earth, as does a lunar night. During the lunar night, the temperature falls below -180 C, and there is no sunlight to provide power to the probe.

During the most recent lunar day, which started on Nov 9, Yutu 2 continued moving to the northwest of Chang'e 4's landing site in the South Pole-Aitken Basin, one of the largest and deepest known basins in the solar system.

The four scientific apparatus mounted on the vehicle - a panoramic camera, a lunar penetrating radar, a visible and near-infrared imaging spectrometer and the Swedish-developed Advanced Small Analyzer for Neutrals - were activated to conduct scientific investigations.

Their findings during the working session will be used to help scientists reveal the origins of substances beneath the South Pole-Aitken Basin, the space administration said.

The record for the longest-working rover on the moon is held by Yutu, China's first lunar rover, which worked on the moon for 972 days, far outliving its designed life span of three months.

It was deployed by the lander of the Chang'e 3 probe, the first Chinese spacecraft to touch down on the moon, in December 2013. Several scientific devices on the lander are still producing data after more than 2,500 days on the near side of the moon, the space administration said.

Yutu broke the previous record for the longest operational lunar rover-321 Earth days-which was held for more than 43 years by the former Soviet Union's Lunokhod 1. It was carried by the Luna 17 spacecraft and landed on the moon on Nov 17, 1970.

The robotic vehicle operated on the lunar surface for 11 lunar days and traversed a total distance of 10.5 kilometers before ceasing operation on October 4, 1971.

In ancient Chinese mythology, Yutu is the white pet rabbit of the lunar goddess Chang'e.