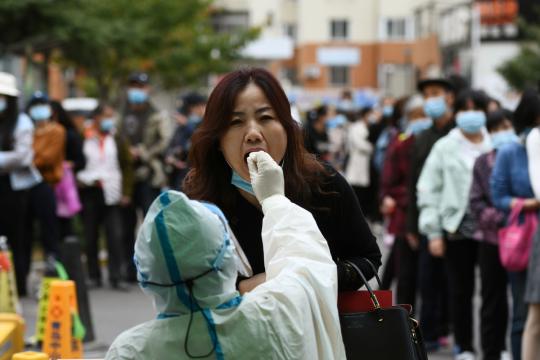 A medical worker in protective suit collects a throat swab from a woman at a nucleic acid testing site in Qingdao, Shandong province, on Oct 13, 2020. (Photo/China Daily)

Feng, the CDC deputy director, said community lockdowns imposed nowadays are "distinctly different "from those in Wuhan early this year.

"Lockdowns are more precise now, affecting smaller areas and having less impact on society, though the goal remains the same: to reduce population-mixing," he said.

When Tianjin detected three local infections among cold-chain workers this month, the city upgraded virus risk levels from low only to medium in three areas where the confirmed patients and several asymptomatic individuals worked and lived. Mass testing covered only residents in medium-risk areas and all cold-chain workers in the city.

Zhang Diyuan, a program developer in Tianjin's Xiqing district, about 100 kilometers from the affected cold-chain facilities, said the new cases did not affect his life at all.

"I'm in favor of such an accurate designation of risks," he said. "As a Tianjin resident, I see no need to expand lockdown areas."

When the Beijing government was dealing with the outbreak in June, the launch of a citywide testing campaign covering all 20 million residents of the capital was initially proposed, Wu said.

"The campaign was called off after screening 10 million because an additional 10 million tests would not detect any more cases and would pile on unnecessary costs," Wu told China Newsweek.

"Other cities should use the science-based and refined method. Large-scale tests should revolve around the origin of confirmed infections and be called off when no new cases can be found."

Zhang, from Shanghai, said during a forum last week that even though the virus continues its rampage worldwide and China has largely stamped out local transmission, there is no need to sever communication with the outside world.

"We should maintain a certain degree of international cargo and personnel exchange while properly managing risks stemming from imported cases," he said.

To reach the goal, Zhang underscored the importance of fever clinics being able to detect suspected cases and send alerts swiftly, as well as the ability of public health workers to track down close contacts.