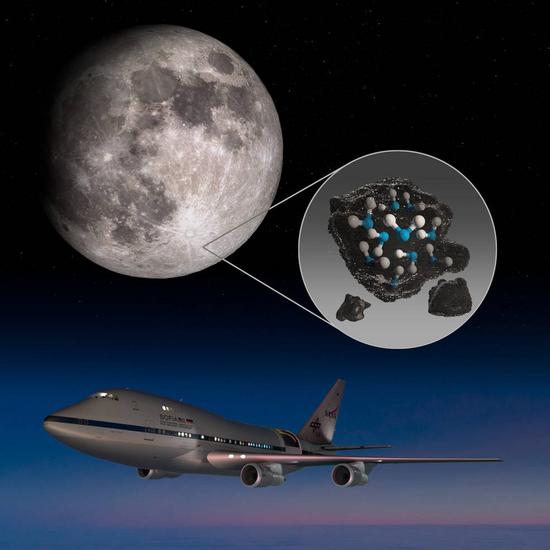 The illustration from NASA shows the moon's Clavius Crater with an illustration depicting water trapped in the lunar soil there, along with an image of NASA's Stratospheric Observatory for Infrared Astronomy (SOFIA). (Xinhua)

NASA's Stratospheric Observatory for Infrared Astronomy (SOFIA) has confirmed, for the first time, water on the sunlit surface of the moon, the agency announced on Monday.

This discovery indicates that water may be distributed across the lunar surface, and not limited to cold, shadowed places, said NASA.

SOFIA has detected water molecules (H2O) in Clavius Crater, one of the largest craters visible from Earth, located in the moon's southern hemisphere. Previous observations of the moon's surface detected some form of hydrogen, but were unable to distinguish between water and its close chemical relative, hydroxyl (OH), said NASA.

Data from this location reveal water in concentrations of 100 to 412 parts per million - roughly equivalent to a 12-ounce bottle of water - trapped in a cubic meter of soil spread across the lunar surface, according to NASA.

"We confirmed water on the sunlit surface of the Moon for the 1st time using @SOFIAtelescope. We don't know yet if we can use it as a resource, but learning about water on the Moon is key for our #Artemis exploration plans," NASA Administrator Jim Bridenstine tweeted.

Water is a precious resource in deep space and a key ingredient of life. Under NASA's Artemis program, the agency is eager to learn all it can about the presence of water on the moon in advance of sending the first woman and next man to the lunar surface in 2024 and establishing a sustainable human presence there by the end of the decade.

"It was, in fact, the first time SOFIA has looked at the Moon, and we weren't even completely sure if we would get reliable data, but questions about the Moon's water compelled us to try," said Naseem Rangwala, SOFIA's project scientist at NASA's Ames Research Center in California's Silicon Valley.

"It's incredible that this discovery came out of what was essentially a test, and now that we know we can do this, we're planning more flights to do more observations," Rangwala said.

SOFIA's follow-up flights will look for water in additional sunlit locations and during different lunar phases to learn more about how the water is produced, stored, and moved across the moon. The data will add to the work of future moon missions, to create the first water resource maps of the moon for future human space exploration, according to NASA.

"Water is a valuable resource, for both scientific purposes and for use by our explorers," said Jacob Bleacher, chief exploration scientist for NASA's Human Exploration and Operations Mission Directorate. "If we can use the resources at the Moon, then we can carry less water and more equipment to help enable new scientific discoveries."

SOFIA is a joint project of NASA and the German Aerospace Center.