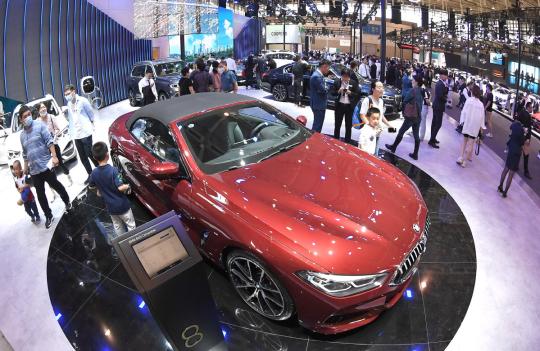 Premier Li Keqiang called on Monday for greater efforts to unleash the potential of consumption in driving economic growth, saying that the strength of the market must be fully mobilized to develop new business models.

Speaking at a video link symposium with provincial governors on the performance of the economy, the premier highlighted the need to accelerate integration of online and offline spending and to promote the coordinated development of new and traditional consumption.

In promoting the transformation and upgrading of the economy, the government must adopt concrete steps to push forward the development of new infrastructure and urbanization initiatives as well as major projects, he said.

Li stressed the importance of exploring new growth drivers in environmental protection and the research and development of key technologies.

His remarks came as the country's key economic data for August and September pointed to a stronger economic recovery.

China's manufacturing purchasing managers' index stood at 51.5 last month, compared with August's reading of 51, according to the National Bureau of Statistics. A reading above 50 signifies growth in factory output.

Non-manufacturing PMI, which gauges sentiment in the services and construction sectors, stood at 55.9 in September, compared with 55.2 in August.

However, consumer spending remained a drag on growth, even though retail sales returned to growth in August for the first time this year, rising 0.5 percent year-on-year, according to the NBS.

Li said the Chinese economy has managed to stabilize its fundamentals and attain the momentum of steady recovery despite immense difficulties, which was a hard-won result.

However, it would still require strenuous effort to reach the targets set for this year, especially given the complex and challenging internal and external environment and rising uncertainties, he said.

Li said local authorities must shore up confidence, conduct in-depth analysis of problems and difficulties and consolidate the momentum of economic recovery.

He said tax cuts and fee reductions, a key pillar of the aid packages for businesses, remained crucial to sustaining economic recovery.

The government must ensure that the newly increased deficits and special bonds for COVID-19 control, which totaled 2 trillion yuan ($296 billion), can be used in a more targeted manner and directly benefit market players, he said.

Governments at various levels, meanwhile, must tighten their belts and refrain from launching sweeping campaigns to collect overdue taxes or levying arbitrary charges on business, he added.

The coverage of inclusive finance must be expanded to offer more effective financial services for smaller firms and struggling sectors, the premier said.

Li underlined the significance of advancing reform and opening-up and improving the business environment to stimulate market vitality and social creativity, saying that economic resilience and vitality can only be harnessed with the development of new market players.

He called for steps to guarantee that retirement pensions can be issued in full and on time and to ensure that social security policies safeguard the living standards of groups hit hard by the pandemic and summer floods.