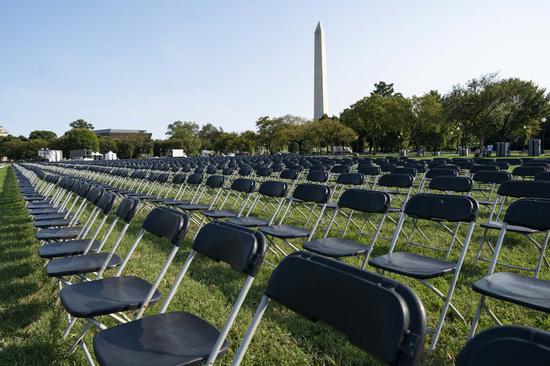 The New England Journal of Medicine, one of the world's most prestigious medical journals, said in an editorial published Thursday that leaders of the United States have failed the test produced by the COVID-19 crisis, and they "have taken a crisis and turned it into a tragedy."

The journal broke with a nearly two-century tradition of avoiding politics to lambast U.S. politicians for their handling of the coronavirus pandemic, according to a report of NBC News.

"COVID-19 is an overwhelming challenge, and many factors contribute to its severity. But the one we can control is how we behave. And in the United States we have consistently behaved poorly," said the editorial.

The editorial, titled "Dying in a Leadership Vacuum," cited China's experience in curbing the spread of the pandemic. 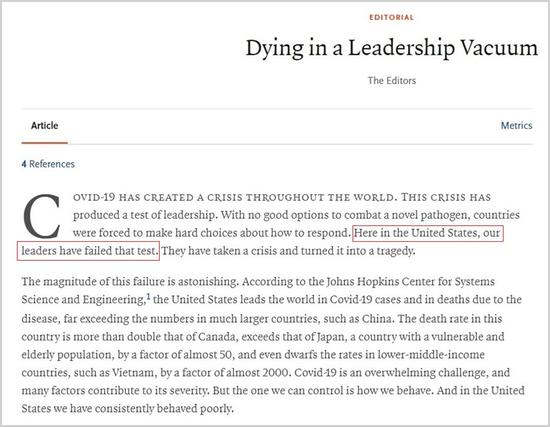 A screengrab from the website of The New England Journal of Medicine shows the title and the first two paragraphs of its editorial "Dying in a Leadership Vacuum," in which the editors write "Here in the United States, our leaders have failed that test." (Xinhua)

"China, faced with the first outbreak, chose strict quarantine and isolation after an initial delay. These measures were severe but effective, essentially eliminating transmission at the point where the outbreak began and reducing the death rate to a reported 3 per million, as compared with more than 500 per million in the United States," said the editorial.

Countries that had far more exchange with China, such as Singapore and South Korea, began intensive testing early, along with aggressive contact tracing and appropriate isolation, and have had relatively small outbreaks, said the editorial.

Months into the pandemic, the United States has recorded more than 7,560,000 confirmed COVID-19 cases and over 212,100 deaths as of Thursday morning, according to the real-time count kept by Johns Hopkins University.

The editors wrote that while COVID-19 is a global crisis, the United States government has "failed at almost every step" to contain the pathogen's spread.

The editorial attributed the country's bad handling of the pandemic to factors including incapable of testing effectively, not providing even the most basic personal protective equipment to health care workers and the general public, way behind the curve in testing, and a lack of emphasis on developing capacity to produce timely results for disease control. 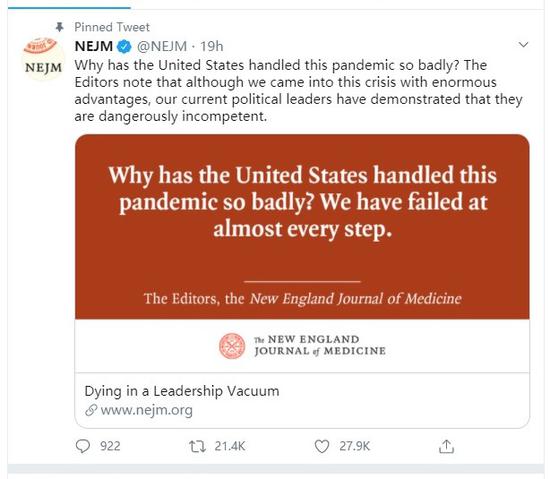 A screengrab from the Twitter account of The New England Journal of Medicine shows its editorial "Dying in a Leadership Vacuum" as a "Pinned Tweet," in which the editors write "We have failed at almost every step." (Xinhua)

"The response of our nation's leaders has been consistently inadequate. The federal government has largely abandoned disease control to the states," said the editorial.

The country's current leaders have undercut trust in science and in government, causing damage that will certainly outlast them, according to the editorial.

"Instead of relying on expertise, the administration has turned to uninformed 'opinion leaders' and charlatans who obscure the truth and facilitate the promulgation of outright lies," said the editorial.

"When it comes to the response to the largest public health crisis of our time, our current political leaders have demonstrated that they are dangerously incompetent," the editors wrote. "We should not abet them and enable the deaths of thousands more Americans by allowing them to keep their jobs."

"Throughout its 208-year history, The New England Journal of Medicine has remained staunchly nonpartisan. The world's most prestigious medical journal has never supported or condemned a political candidate. Until now," said a report of The New York Times. Enditem