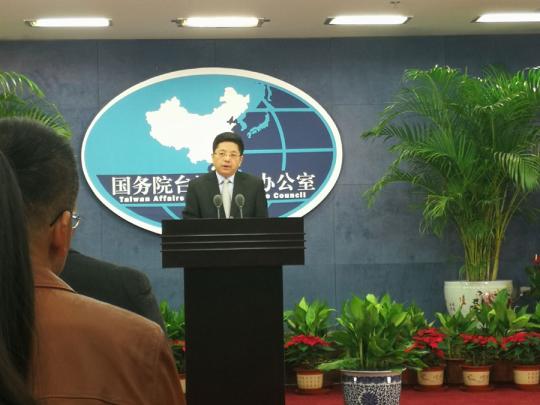 Ma Xiaoguang, spokesperson for the Taiwan Affairs Office of the State Council. （Photo/chinadaily.com.cn）

The Kuomintang's decision not to attend this year's Straits Forum will not affect civil exchanges between people across the Straits, Ma Xiaoguang, a spokesman for the Taiwan Affairs Office of the State Council, said on Wednesday.

Taiwan's main opposition party announced on Monday that it will not send an official delegation to the Straits Forum, which is scheduled to open on Saturday in Xiamen, Fujian province. It had originally planned to send a delegation led by former legislative speaker Wang Jin-pyng.

Ma said that the Straits Forum is a nongovernmental forum and a platform for exchanges and dialogue between people of all sectors from both sides of the Straits. As long as compatriots across the Straits participate, the momentum of exchanges and cooperation will continue.

Since 2008, the Kuomintang and the Communist Party of China have strengthened exchanges on the common political basis of the 1992 Consensus, acknowledging that there is only one China. The two parties have promoted the peaceful development of cross-Straits relations and achieved fruitful results.

"By sticking to and maintaining this basis, cross-Straits relations can develop peacefully and stably. If this basis is altered or even abandoned, relations will inevitably stagnate and even move backward," Ma said.

The Chinese mainland maintains the policy of developing exchanges and cooperation with and opening doors to all parties and organizations in Taiwan based on the 1992 Consensus.

"I believe that as long as everyone considers the common interests of compatriots on both sides of the Straits, such exchanges and cooperation will not be fundamentally hindered," he added.

Ma said the Straits Forum has always been a grassroots event based on people-to-people exchanges since its establishment. It has played a positive role in expanding and deepening nongovernmental exchanges, jointly promoting Chinese culture, cross-Straits harmony and economic and social integration. It has become the largest and most extensively participated event of its kind and an important platform for uniting compatriots from both sides of the Straits.

According to Ma, the results of a poll last month showed that nearly 60 percent of Taiwan compatriots support the strengthening of cross-Straits exchanges.

Ma said this year's event will be held in line with COVID-19 prevention and control measures.

Representatives of parties, organizations and people from all walks of life in Taiwan are expected to participate in the event, which will feature online and offline activities.

It will have 46 activities featuring cross-Straits economic ties, culture, grassroots issues and youth. Two new fields of exchanges and cooperation will be added to the agenda this year－epidemic prevention and public health.