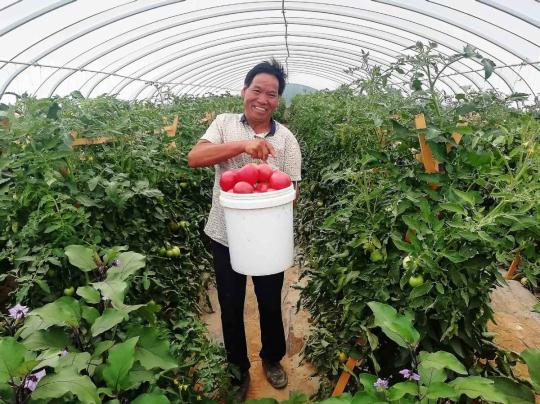 Gao and his family moved to Liuhu town, Yumen city, Gansu province, from their hometown in Huining in 1998, seeking a better area with irrigated land to grow crops to make a living.

"The Huining region was too arid to grow crops. We couldn't even get enough food to eat," the 50-year-old said.

Despite irrigated agricultural land, Liuhu was rather desolate in the 1990s. As one of the first batch of 80 people to move there, Gao built a house with materials offered by the local government, including steel beams, bamboo poles and straw. His family was also offered a small piece of land－less than 667 square meters per capita－to grow wheat in front of the house.

Residents had to go to other towns to buy rice, noodles and vegetables, which required a round-trip walk of up to five hours, Gao said.

Life has become better since 2013, when the town started to grow plants in environmentally controlled regions through greenhouse farming.

"At the beginning, we built ordinary greenhouses. The government provided steel frames, plastic film, technical guidance and greenhouse construction for free. I only spent some 6,000 yuan ($860) building six 80-meter greenhouses to grow tomatoes, watermelons and peppers," said Gao, who is also deputy secretary of the Party branch in Fumin village.

"Surprisingly, I had a good harvest that year and the quality of life immediately improved. My success encouraged many others to do the same and learn to operate greenhouses."

Positive changes happened again in 2015 when the local government introduced solar greenhouses, which provide adequate heat that plants need for growth even during the night or cold seasons. The technique is generally used in the northern regions.

"I took it as a great opportunity for a good change, as we can grow plants the whole year. In the winter and spring, we usually had nothing to do at home or went to other towns for work," he said.

"However, most residents didn't want to try, fearing that they couldn't learn the techniques to manage a solar greenhouse and worrying about selling produce."

In order to motivate residents, Gao suggested the local government invite technical experts in Wuwei city to come to teach. For three years, locals learned skills like ditching, transplanting seedlings and controlling the temperature in solar greenhouses in different weather.

"I recorded the key skills in three notebooks and searched for answers when running into any obstacles," Gao said.

Gao's achievement encouraged more people to join the group and develop modern agriculture. Gao patiently guided them and communicated with companies in other cities to increase sales.

"We have regular buyers in cities like Beijing now," he said.

Gao has also set up a farming cooperative along with some 30 residents, discussing greenhouse management skills and expanding the market.

Since 2015, Fumin village, which has 783 residents, has built 168 ordinary greenhouses and 10 solar greenhouses for growing cash crops like cherry tomatoes, melons, strawberries and dragon fruit, according to Gansu Daily. By the end of 2018, all 167 people in 44 underprivileged families in the village had been lifted out of poverty.

"I am confident that I will lead the residents to expand the scale of production and live better lives," Gao said.