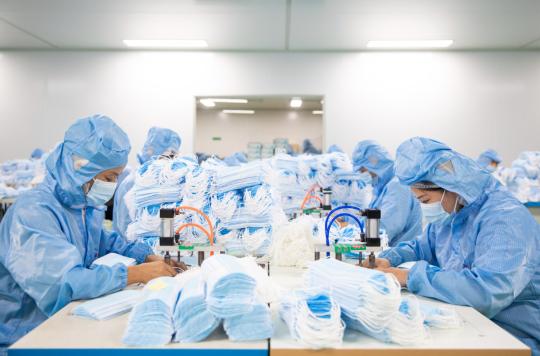 The United States Trade Representative's office said on Wednesday that it has extended tariff exclusions on a wide range of Chinese goods, including smart watches, medical masks and some medical equipment, till the end of this year.

The original one-year exclusions of such Chinese imports from the Section 301 tariffs imposed by the US government were set to expire on Tuesday. The USTR has extended the exclusion by four months this time.

The products on the list include a number of Bluetooth and wearable data-transmitting devices, such as those imported from China by Apple, FitBit, Sonos and other technology companies.

Other exclusions were for some face masks, respirators, stethoscope covers, cotton gauze sponges, blood pressure cuff sleeves and other medical devices. Products such as upright pianos, liquid crystal display modules and stainless steel watch cases were also exempted from tariffs until the end of this year.

The announcement came after Chinese Vice-Premier Liu He had a phone call with US Trade Representative Robert Lighthizer and US Treasury Secretary Steven Mnuchin last week. The two sides had constructive talks on cementing macroeconomic cooperation and agreed to push forward the implementation of the phase-one agreement signed in January.

The COVID-19 pandemic continues to plague the US, which is in urgent need of face masks, respirators and protective gowns. Hence it is understandable that the US has extended the tariff exemptions for certain medical supplies imported from China, said Mei Xinyu, a researcher at the Chinese Academy of International Trade and Economic Cooperation.

Gao Lingyun, a research fellow at the Institute of World Economics and Politics of the Beijing-based Chinese Academy of Social Sciences, said it will be constructive if China and the US implemented the phase-one trade deal smoothly. It will boost bilateral trade, instill more confidence in companies from both sides and spur global economic recovery.

Liu Yonghao, chairman of New Hope Group, one of China's largest agribusinesses in terms of sales revenue, said the differences between China and the US to some extent have affected trade, especially trade in agricultural products, as the Chinese company imported huge quantities of corn, sorghum and soybean from the US every year.

"We hope related parties will maintain the globalization pattern and resolve the various disputes under the World Trade Organization framework," said Liu. Companies from both countries can make more favorable production plans and arrangements and their domestic consumption will also be boosted by healthy business ties.

New Hope currently runs factories in more than 30 countries across the world and many raw materials are sourced from local markets, while the rest is purchased globally.

To avoid risks, Liu said Chinese firms must be prepared to resolve issues such as adequately combining economic interests and globalization, adding more destinations for raw material imports and increasing investment in innovation.