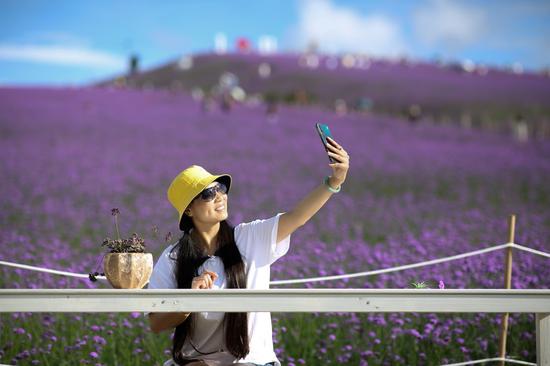 A tourist poses for a selfie in a verbena field in Gaopo Township of Guiyang, capital of southwest China's Guizhou Province, Aug. 14, 2020. (Photo by Zhang Hui/Xinhua)

Chinese medicine experts have been cooperating with computer scientists to develop AI-powered technologies that can detect coronary artery disease through facial images.

In the latest study, Chinese researchers explored the possibility and feasibility of using AI to screen coronary artery disease via facial images.

Facial appearance has long been identified as an indicator of cardiovascular risk. Features such as male pattern baldness, earlobe crease, xanthelasmata (yellowish deposit of fat around or on the eyelids) and skin wrinkling are the most common predictors.

Researchers from China's National Center for Cardiovascular Diseases and Tsinghua University first enrolled 5,796 Chinese patients for the study. The participants underwent heart imaging tests, had their facial photo taken and answered questionnaires about their social-economic status, lifestyle and medical history.

An AI algorithm was then developed and trained based on the patients' data. The algorithm was tested on facial images of 1,013 other patients across nine Chinese hospitals.

According to the results published in the European Heart Journal, the algorithm had a sensitivity of 80 percent and specificity of 54 percent, outperforming the traditional prediction model of coronary artery disease.

The researchers said further studies are needed to make a practical application of the algorithm. The current low specificity of the algorithm raises a concern as false-positive results may confuse both patients and clinicians.

Overall, the results suggested that a deep learning algorithm based on facial images can assist coronary artery disease detection, holding promise for pre-test screening of the disease in communities.

In an editorial published in the same issue of the journal, researchers from University of Oxford said "using selfies as a screening method can enable a simple yet efficient way to filter the general population towards more comprehensive clinical evaluation," and "the full potential of such novel and out-of-the-box diagnostics lies ahead of us." Enditem