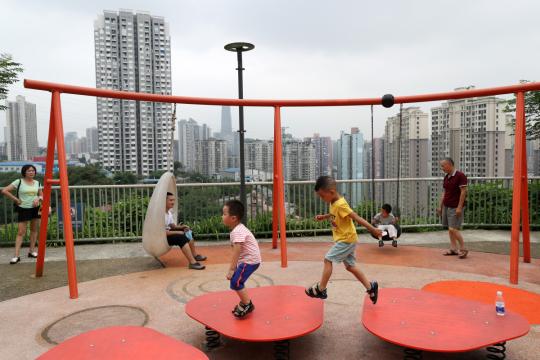 Every afternoon, Li Qingfang and Zhou Zukang take their grandson to play at the nearby free community park, which was opened to the public in January last year.

The Sports and Cultural Park of Dashuijing Community in Chongqing's Jiangbei district used to be a large hillside covered with garbage and overgrown weeds lying between residential areas and the main road.

"In the past, this hill was big trouble for us," said Li, who has lived in the community for seven years. "The hill was so dirty, with lots of trash, and we had to make a long detour to reach the bus stop."

Now the wasteland has become a favorite place for residents like Li who live in the low-income, relocation housing projects nearby.

"We finally have a good place to relax and exercise," she said.

It is estimated that about 11,000 families in the surrounding 10 communities can enjoy the park.

It is no longer necessary for people to go around the hill to reach the bus stop. Now people can get there simply by walking through the park, which is accessible through several gates.

At the foot of the hill, people can play basketball and badminton. A winding walking trail leads to the recreational areas on the top, where they can find fitness equipment and a children's playground.

There are also a 24-hour self-service community library and a book cafe in the park.

A mountainous city, Chongqing has a large amount of unusable, idle land, which forms "bald spots" on the urban landscape.

In 2018, in order to improve the city's image and people's living environment, Chongqing rolled out a plan to erase those "bald spots" in three years, including 309 pieces of wasteland in the downtown area. Instead of regular afforestation, such as planting trees or grass, the Chongqing Municipal Commission of Planning and Natural Resources adopted an innovative approach to turn the wastelands into community parks.

The Sports and Cultural Park of Dashuijing Community was one of the first projects to be completed.

"We took into consideration the geographical location, site conditions and the needs of the surrounding residents and introduced the concept of 'mountain sports', so this park can fully meet their need for sports and recreation," said Zhang Yu from the municipal planning and natural resources commission.

"Those parks are the common areas for people to communicate, to learn, to relax and to exercise," Zhang said. "These projects can not only improve land utilization, but also enhance the quality of our public space."

The sports and cultural park project has become an example of efforts to redevelop inefficient land by the Ministry of Natural Resources.

By the end of this year, Chongqing will have built 92 sports and cultural community parks serving over 2 million people.