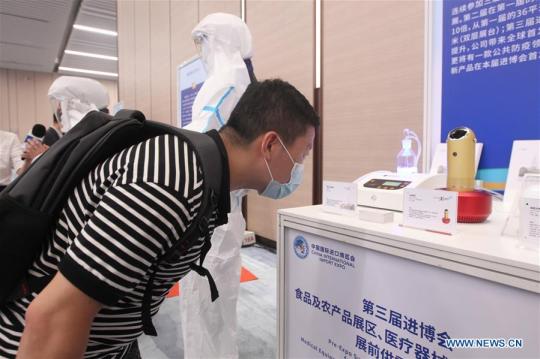 A visitor looks at exhibits during a supply-demand matchmaking meeting ahead of the 3rd China International Import Expo (CIIE) in Shanghai, East China, on July 26, 2020. [Photo/Xinhua]

The third China International Import Expo, to be held as scheduled at the National Exhibition and Convention Center (Shanghai) in November, features a larger planned business exhibition space and is set to wow participants with more amazing offerings.

"The third CIIE is slated to be held in Shanghai from Nov 5 to 10, and preparations for the expo are all well underway," said Sun Chenghai, deputy director-general of the CIIE Bureau at a briefing on Friday.

To mark the 100-day countdown on Friday, the briefing was held to provide an update on its preparations

According to Sun, the focus of current preparations for the third CIIE has shifted from attracting exhibitors to drawing in buyers and organizing the expo. Strong progress has been made.

Companies have eagerly registered for the 2020 edition, and so far the planned business exhibition space has been completely booked. The booked exhibition areas for consumer goods, medical equipment and healthcare products, as well as trade in services have already surpassed their planned space. The exhibition area for automobiles is almost fully booked.

The business exhibition area will be divided into six sections displaying food and agricultural products, automobiles, the intelligent industry and information technology, consumer goods, medical equipment and healthcare products, as well as trade in services.

Four special subsections dedicated to public health and anti-epidemic products and services, smart transportation, energy conservation and sporting goods will be set up during the event.

The number of Fortune 500 companies and industry-leading companies attending the third CIIE almost equals that of the first and second edition, the CIIE Bureau said.

A greater number of policies than last year have been released and is expected to attract and better serve exhibitors and buyers. The General Administration of Customs recently launched a slew of supporting policies to facilitate the customs clearance of attendees at the expo.

Sun said that a working mechanism to attract buyers has also been improved. While insisting on letting the government undertake the main job of attracting buyers from across the globe, the third CIIE is also giving more play to the market by signing with several organizations to help with the expo.

Matchmaking services for buyers and sellers have also been optimized. Introductions to 169 exhibitors and their products were sent to targeted buyers. A pre-expo matchmaking session for consumer goods was held, drawing in more than 50 exhibitors and more than 150 buyers, and resulting in a great success.

According to Sun, more information to connect supply and demand will be released online and more large trade and investment matchmaking sessions will be held during the expo.

The CIIE Bureau has stepped up efforts to prepare for the Hongqiao International Economic Forum, which is a significant part of the CIIE. The forum will offer more insights and information through diversified content, making "Hongqiao voice" more relevant. It will also enhance its membership and registration systems to attract more members from around the world.

The exhibition area for cultural exchanges will be expanded at the third CIIE to better showcase the unique cultures of different countries.

Optimized services for attendees will be provided. A task force to prevent and control the epidemic has been founded. All the measures are aimed at ensuring the venue is absolutely safe.