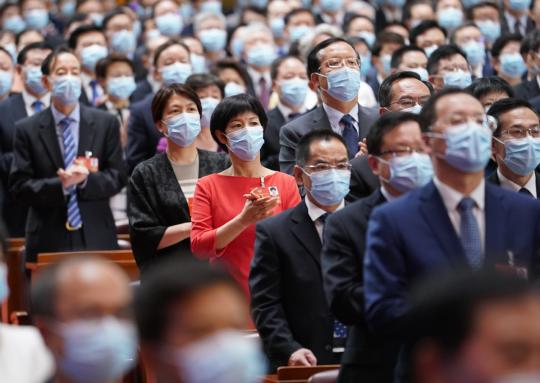 Political advisers attend the closing meeting of the third session of the 13th National Committee of the Chinese People's Political Consultative Conference in Beijing on May 27, 2020. （Photo/Xinhua）

Political advisory bodies nationwide should be an important channel for building consensus and resolving conflicts, and play a better role in China's governance system, the country's top political adviser said on Wednesday in Beijing as the annual session of the 13th National Committee of the Chinese People's Political Consultative Conference ended.

Wang Yang, chairman of the 13th National Committee of the CPPCC, called on all political advisers to keep in mind the overall strategic vision of the great rejuvenation of the Chinese nation and major changes in the world so that their proposals can better contribute to the undertakings of the Communist Party of China and the State.

He made the remarks in a speech to about 2,000 national political advisers at the closing meeting of the third session of the 13th CPPCC National Committee. President Xi Jinping and other Chinese leaders attended the meeting.

Wang said the weeklong session was held at an important point, as China's COVID-19 epidemic prevention and control efforts have achieved major strategic results and the building of a moderately prosperous society in all respects has entered a decisive stage.

During this session, all advisers have actively made proposals and consolidated a consensus focusing on normalizing epidemic prevention and control, promoting economic and social development and realizing the goals and tasks of winning the decisive battle of poverty alleviation, he said.

Wang urged the members to further improve their ability to perform their duties. Political advisers should further grasp consultation methods, make good use of the internet, big data and other modern methods to make their proposals more forward-looking and accurate and be more targeted and effective in consensus building, he said.

Wang stressed the role of the CPPCC in Chinese-style democracy. "Taking advantage of socialist consultative democracy, the CPPCC can effectively organize all political parties, different ethnic groups and people of all walks of life to make suggestions and build consensus, which is conducive to integrating adherence to CPC leadership with multiparty cooperation," he said.

Participants at the closing meeting approved a resolution on a work report of the Standing Committee of the CPPCC National Committee, a report on the examination of proposals and a political resolution on the annual session.

During the second session of the 13th National Committee of the CPPCC last year, 5,488 proposals were submitted and 4,089 of them were accepted for deliberation.

Zheng Jianbang, vice-chairman of the CPPCC National Committee, said political advisers should focus more on key tasks this year such as building a moderately well-off society in all aspects, eliminating absolute poverty and drafting the 14th Five-Year Plan (2021-25).

More consultation on proposal handling will be carried out to provide a communication platform between proposers and handling units. Online methods will also be adopted, he said.