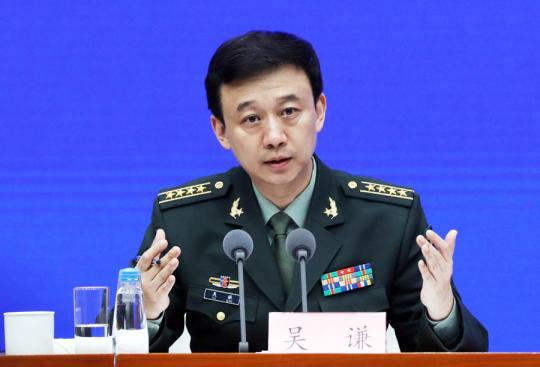 China's modest 2020 military budget growth is "reasonable and necessary" to address security issues both at home and abroad, while striking a balance with the nation's economic development, senior colonel Wu Qian, spokesman of the Ministry of National Defense, said on Tuesday.

The central government proposed an annual defense budget of about 1.27 trillion yuan ($178 billion), a 6.6 percent rise on the last budget. The budget's growth rate is the lowest since 1988, when a 3.81 percent increase was proposed.

China has upheld the principles of adjusting its military budget in accordance with its security needs and economic development, Wu said in a video interview posted by the ministry.

"China resolutely follows the path of peaceful development and upholds a defense policy that is defensive in nature," he said. "China's military spending is open, transparent, and grows at a moderate level."

"But China's spending is still lower than what is needed to protect the nation's sovereignty, security, and development interests, as well as to carry out its international duties and fulfilling the nation's development needs," Wu said.

"It is thus reasonable and necessary to keep growing China's military spending in a moderate and stable manner," he said.

In recent years, China is faced with new security challenges and risks. On the international level, there is the rise of hegemony and power politics, coupled with unilateralism, geopolitical risks and challenges to the current global security order, he said. "The world is not that peaceful."

On the domestic front, Wu said China is facing an ever more complex security situation as the fight against secessionist movements becomes more intensified.

The pro-secession Democratic Progressive Party in Taiwan is "inviting foreign powers to serve its own goals and is going further in its pursue of separating the country," he said.

Meanwhile, security on Chinese soil and Chinese investments overseas are also facing real threats. "When it comes to issues of national security, we must keep a level head, and prepare for dangers ahead," he said.