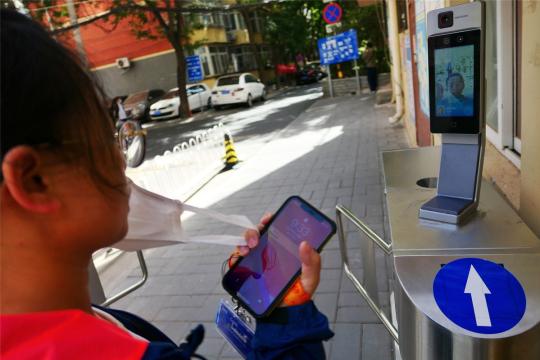 A woman removes her mask to enable the use of facial recognition technology by a smart device in Beijing on Monday. The device automatically checks people's body temperatures and personal information before allowing entry to the neighborhood. (LI TIANJI/FOR CHINA DAILY)

China's draft civil code will be submitted to the top legislative body this week for final deliberation during the country's biggest annual political gathering.

The draft, which consists of seven volumes, including general provisions and sections on property, contracts, personality rights, marriage and family, inheritance and torts, will be reviewed by the National People's Congress during the two sessions, the annual meetings of the NPC and the Chinese People's Political Consultative Conference.

The compilation of personality rights in a separate volume is a major development and innovation in democratic legislation and the civil code. It will help deepen the legal protection of personal dignity and individual rights, said Shi Jiayou, professor at Renmin University of China and executive director of the National Research Center of Civil and Commercial Law, speaking to China Global Television Network.

In addition, the sixth chapter is specifically dedicated to privacy rights and the protection of personal information. If passed, the section will help extend the scope of privacy protection.

Yang Lixin, also a law professor at Renmin University, said the development of the internet has made it easy to infringe on individual personality rights. The growth of social media has provided numerous platforms and better technological conditions to publish content that defames or insults others.

"The new content in the personality rights section is aimed at preventing violations of privacy, reputation, honor, etc, so the damage caused by such infringements can be better rectified," he said.

The draft for the final reading stipulates that no organization or individual shall uglify, blemish or forge people's images by the use of information technology.

It defines privacy as private life as well as the private space, activities and information that a regular person "is unwilling to be made known to others", which is also highlighted in the final draft.

It stipulates that no organization or individual shall infringe on other people's privacy rights by means of spying, intrusion, leaks or public disclosure, including by the use of telecommunication tools.

The document also clarifies the definition of personal information and expands the scope to include "email address and whereabouts", along with name, date of birth, identification number, biometric information, address and telephone number.