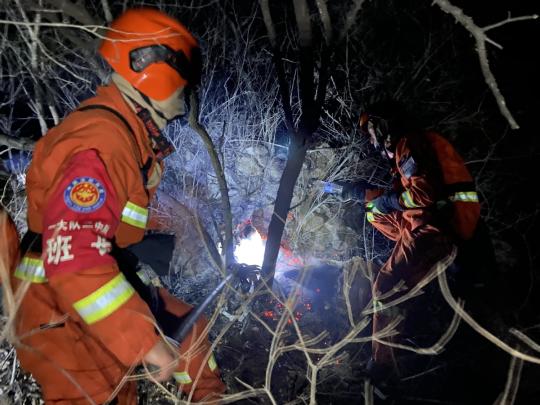 Several fires fueled by strong winds in downtown areas and mountains have been extinguished without casualties in Beijing, Tianjin and Hebei province.

Since Wednesday, the region has recorded its most powerful winds of the year so far, with gusts as high as 132 kilometers per hour, according to the National Meteorological Center on Thursday.

In addition, about 86 percent of the capital's automatic weather stations detected winds as high as 74.5 km/h, according to the Beijing Meteorological Service.

The wind slowed on Thursday, and the floating dust brought by the gusts has reduced as well. The dust brought air quality to severe pollution levels on Wednesday afternoon, according to data from the municipal environmental authority.

The wind had also fueled fires in the northern region since Wednesday.

In Beijing, a total of 500 firefighters were sent to put out a forest fire that occurred in Yongning town, Yanqing district on Wednesday afternoon, according to Beijing firefighters' official Weibo account.

The Jinnan firefighter's bureau advised residents to be more aware of fire risks during strong winds.

"Please do not carelessly throw cigarette butts, and please remember that burning waste or grass is banned," it said.

In Hebei, Hengshui city's firefighter's bureau received several reports of fires on Wednesday night, according to the bureau's official Weibo account. Other cities in the province, including Baoding, Cangzhou and Langfang, also had fires.

No casualties were reported by Thursday night.

Wei Hao, a resident in Baoding city, Hebei, said the wind was so strong that he declined to go out to dump the garbage on Wednesday night.

"Some facilities must have been broken by the wind, because the power was off at my apartment, and so was the water and gas," Wei said. He said that the utilities were restored on Thursday, but with the wind still blowing, he hoped they wouldn't be cut off again.

It is common to experience strong winds and dust during spring in the region.

In March, the average number of days with dusty weather in Beijing used to be 3.6, but the capital has witnessed fewer such days in recent years, data from Weather China, a website of the China Meteorological Administration showed.