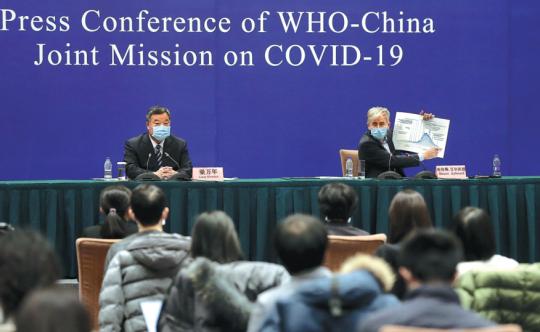 While the substantial recent slowdown in the spread of novel coronavirus in China is real, and it is now reasonable to restore work activities step by step, health experts warned that risks abound of the virus flaring up again and they cautioned against complacency, the WHO-China Joint Mission on COVID-19 said at a news conference after its one-week field investigations in China.

"Ambitious, agile and aggressive" control measures taken by China to control the novel coronavirus pneumonia epidemic, bolstered by nationwide solidarity and advanced scientific research, have altered the curve of the outbreak for the better, averted a large number of potential cases and offered experience in improving the global response to the disease, the joint team of Chinese and World Health Organization health officials said on Monday.

Bruce Aylward, senior adviser to the director-general of the WHO and head of the foreign expert panel, said measures such as mass isolation, shutting down transportation and mobilizing the public to abide by hygienic practices have proved effective in curbing a contagious and mysterious disease, especially when the whole of society is committed to the measures.

"This approach of all-of-government and all-of-society is very old-fashioned and has averted and probably prevented at least tens of thousands even hundreds of thousands, of cases," he said. "It is extraordinary."

Aylward said he recalled from the trip in China one particularly striking fact: In Wuhan, Hubei province, the epicenter of the outbreak and under a severe medical strain, hospitals beds are opening up and medical institutions have the capacity and space to receive and care for all patients for the first time in the outbreak.

With the emergence of clusters of infection in foreign countries, Aylward said, strategies adopted by China can be implemented in other continents, including promptly locating and quarantining close contacts, suspending public gatherings and stepping up basic health measures such as washing hands regularly.

Liang Wannian, chief of the National Health Commission's institutional reform department and head of the Chinese expert panel, said one key understanding shared by all experts is that in Wuhan, the explosive growth of new infections is effectively curbed. But with over 400 new confirmed cases each day, containment measures must be maintained, with a focus on timely diagnosis and treatment, he added.

Liang said much remains unknown about the novel coronavirus. Its transmission capability may have surpassed that of many other pathogens, including the virus that causes severe acute respiratory syndrome, or SARS, posing great challenges in ending the epidemic, he said.

"In enclosed spaces, the virus spreads between people very quickly, and we found that asymptomatic patients, those who carry virus but do not display symptoms, may be able to spread the virus," he said.

Liang said that based on the latest findings, the virus has not mutated, but since it jumped from an animal host to a human, its transmission capability has clearly From page 1 increased and caused sustained human-to-human infections.

The joint expert team led by Liang and Alyward visited Beijing and Guangdong and Sichuan provinces before heading to Hubei to conduct field investigations, according to the commission.

In Hubei, the experts visited Tongji Hospital's Guanggu branch in Wuhan, the temporary hospital set up in the city's sports center and the provincial center for disease control and prevention, to study Hubei's epidemic control work and medical treatment, the commission said.

Minister of the National Health Commission Ma Xiaowei, who was briefed on the team's findings and suggestions in Wuhan, reiterated that China's forceful measures to curb the disease's spread have protected the health of the Chinese people and contributed to safeguarding global public health.

China is confident in its capabilities and is determined to win the battle, and it will continue to improve disease control measures while achieving economic and social development, Ma said.

China also will continue to improve its disease prevention and control mechanism and its health emergency response system, and strengthen its cooperation with the WHO, he added.

According to the health commission, the number of new confirmed cases on the Chinese mainland dropped to 409 on Monday, with only 11 cases reported outside Hubei.

Commission spokesman Mi Feng said at another news conference on Monday that aside from Hubei, 24 provincial-level regions across China had reported zero new infections on Monday, with the remaining six having each registered three or fewer new cases.

As of Monday, Gansu, Liaoning, Guizhou and Yunnan provinces have lowered their emergency response from the first to the third level of the fourtier system, and Shanxi and Guangdong have each downgraded theirs to the second level.

"Daily new infections nationwide have fallen to under 1,000 for five days in a row, and existing confirmed cases have been trending downward in the past week," Mi said, adding that recovered patients have outnumbered new infections across China.

The number of new deaths rose by 150 on Monday to a total of 2,592 nationwide. The cumulative number of confirmed cases was put at 77,150, the commission said.