China vows at Davos it will continue to uphold globalization 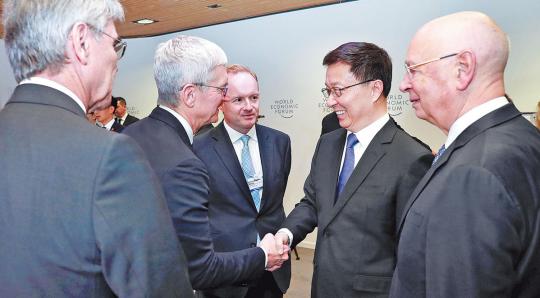 Vice-Premier Han Zheng, also a member of the Standing Committee of the Political Bureau of the Communist Party of China Central Committee, greets business leaders while attending the annual meeting of the World Economic Forum in Davos, Switzerland, on Tuesday. (PANG XINGLEI/XINHUA)

Vice-Premier Han Zheng pledged on Tuesday that China will continue to defend globalization and open wider to the outside world despite the challenges posed by unilateralism and protectionism.

Han praised economic globalization as the trend in history and an essential condition for productivity growth and the natural outcome of scientific and technological advancement.

He said that the fundamental solution to resolving the difficulties and problems of economic globalization lies in upholding multilateralism and building an inclusive and open world economy.

Han said that as economic globalization stands at a crossroads, the future direction it takes is a matter that requires attention and serious reflection. "To deal with the difficulties faced by economic globalization, it is essential to grasp the underlying patterns and the general trend."

Han said that in a world where all economies are deeply integrated, no country can achieve sustainable development outside the global division of labor. "We should make economic globalization more open, inclusive, balanced and beneficial for all."

Han, a member of the Standing Committee of the Political Bureau of the Communist Party of China Central Committee, said that China will open even wider to the outside world.

"Despite some unilateral moves by some countries, China will not stop pursuing high-quality opening up and will not follow in their footsteps to move in the opposite direction of globalization," he told the audience, which included government, business and civil society leaders.