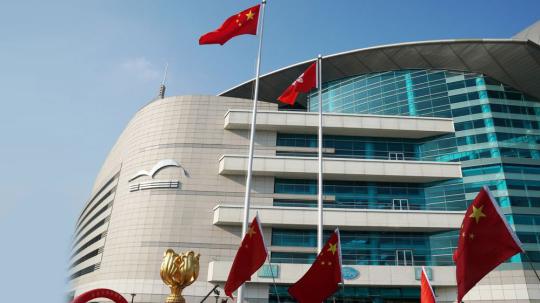 China said on Monday that it has suspended review of requests by United States military ships and aircraft to visit Hong Kong and also announced sanctions against several U.S. non-governmental organizations in response to a Hong Kong-related U.S. legislation.

Foreign Ministry spokeswoman Hua Chunying said at a daily news briefing on Monday that sanctions will apply to NGOs that "behaved badly" during Hong Kong's disturbances. She accused the NGOs of having "great responsibility for the chaos in Hong Kong".

Hua said a large amount of facts and evidence has shown that these NGOs support anti-China forces that seek to disrupt Hong Kong, instigate them to engage in extreme violent crimes and incite separatist activities for Hong Kong independence.

"We urge the U.S. to correct the mistakes and stop interfering in our internal affairs. China will take further steps if necessary to uphold Hong Kong's stability and prosperity and China's sovereignty," Hua said.

In another development, Hua again urged Canada on Monday to release Huawei's financial chief, Meng Wanzhou, who is being "unreasonably detained".

Meng was taken into custody on Dec 1 last year and has been detained in Canada since. Her arrest was made at the request of the U.S., which is seeking her extradition on fraud charges. Meng and Huawei have repeatedly denied any wrongdoing.

The U.S. and Canada have abused their bilateral extradition treaties, arbitrarily imposed coercive measures on Chinese citizens and seriously violated the legitimate rights and interests of Chinese citizens, Hua said.

China remains committed to safeguarding legitimate rights and interests, including those of both Chinese citizens and enterprises, she reiterated.

"We strongly urge the Canadian side to take our position and concerns seriously, earnestly correct its mistakes and release Meng as soon as possible to ensure her safe return to her motherland," she said.

Meng published an open letter on Monday expressing her gratitude to all supporters. In the letter, she recounted having experienced fear and pain, disappointment and struggle throughout the year. She said she has learned to face the unknown with courage.