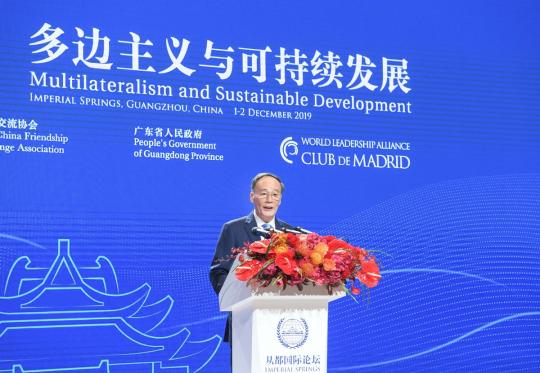 Vice-President Wang Qishan said on Sunday that China adheres to multilateralism and its peaceful development is not intended to replace others nor to expand and dominate the world, but to uphold the global governance concept of common consultation, co-construction and sharing, and to promote the democratization of international relations.

He was speaking at the launch of the 2019 Imperial Springs International Forum in Guangzhou, Guangdong province, attended by more than 260 former officials, heads of international organizations and academic and business leaders.

"Multilateralism is the inevitable choice of mankind, expanding cooperation and common development are the widespread demands of all countries in the world, and the practice of multilateralism with the purposes and principles of the Charter of the United Nations as the core has yielded fruitful results," he said.

The forum, founded in 2014, has become a platform for comprehensive exchanges between China and the world. "China is not only a practitioner and defender of multilateralism, but also a beneficiary and promoter," he said.

China has always adhered to the purposes and principles of the Charter of the United Nations, extensively participated in international organizations and conventions, actively undertaken international responsibilities, adhered to WTO rules and made significant contributions to promoting the recovery and growth of the world economy, Wang said.

China opens up the market and proposes to build the Belt and Road Initiative to share China's development opportunities with the world, he said.

China is willing to work with the international community to fully implement the 2030 agenda for sustainable development, actively participate in international cooperation on climate change, open up a new path of sustainable development, build an open and shared world economy, and build an inclusive and happy society and a beautiful home for people to live in harmony with nature, he added.

"We cannot do anything without the cooperation between countries," she said. "What we can do between France, the European Union and China together can actually change things and move in the right direction."