China has impressed the world with the construction of its high-speed railways and its first self-built large jetliner, and now the oceans are the next stage for high-end manufacturing as construction commences of the nation's first homegrown cruise ship, which is scheduled to be delivered in September 2023.

The 135,500-metric-ton Vista-class vessel will be built by Shanghai Waigaoqiao Shipbuilding Co Ltd, a company controlled by the China State Shipbuilding Corp. As a complex mega system project, it is completely different from the vessels Chinese shipyards have built.

"The greatest challenges will be safety and the supply chain," said Zhou Qi, vice-president of Shanghai Waigaoqiao Shipbuilding, who has been working in the shipbuilding industry for two decades.

"We could spend days talking about the hardships of the cruise liner construction process. To sum up, it involves bringing a gigantic entertainment complex from the land to the sea safely and in a timely manner, while keeping weight, running noise and costs under control," said Wu.

As Zhou described, the vessel will be a floating city equipped with the latest technologies to make passengers safe and comfortable, and make the vessel environmentally friendly and to reduce noise as much as possible.

Cruise ships are one of the most difficult types of vessel to build because they have higher requirements and standards in design, craftsmanship, operation and management, according to Wu.

In 2016, Japan's Mitsubishi Heavy Industries Ltd abandoned its ambition to build European cruise liners and shifted to smaller ferries and other medium-sized passenger ships due to cost overruns and delays in the construction of two 100,000-ton class cruise liners for Europe's Carnival Corp, Reuters reported.

According to Mitsubishi Heavy Industries, construction of the two vessels was plagued by faulty engines, late design changes and onboard fires, which resulted in a delay of more than one year and increased construction costs by nearly $2 billion, about four times the original cost.

"I think we should not be too confident in our own design and supply chain. The complexity of building a cruise vessel is unparalleled," said Zhou. 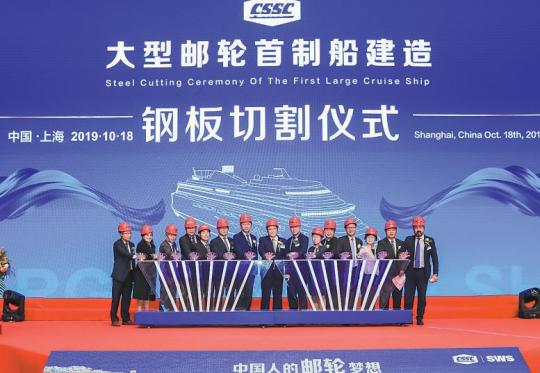 In the meantime, the company has poured 1.86 billion yuan ($265 million) into the reconstruction project to meet the requirements of cruise ship building.

"The cruise liner will consist of about 70 public areas, and each of them contains numerous systems that have to coordinate with each other to guarantee the areas' normal functioning," Zhou said.

Due to the complexity of cruise ship construction and operation, the nation's domestically made cruise ship will be jointly built and managed by Chinese and international industry leaders, Zhou said.

A design and construction cooperation agreement was signed by CSSC, Carnival and Fincantieri during the China International Import Expo last November. Under the agreement, the first of the two 135,500-ton domestically made cruise ships is scheduled for delivery in September 2023 and the second in 2024.

CSSC Carnival Cruise Shipping Ltd will be responsible for providing expertise in cruise management and operation, and CSSC-Fincantieri Cruise Industry Development Ltd is tasked with the design of the cruise ships.

"Our collaborations with our foreign partners are targeting the new demand coming from China, without any competition," said Wang with CSSC Cruise Technology Development.

"We are carrying out in-depth cooperation and collaborative development with both Carnival and Fincantieri," he added.

The fact that the annual delivery capacity of about seven against the demand for some 15 cruise vessels leaves substantial room for shipbuilders with the ambition and capability to participate.

"Opening-up and collaboration do not conflict with innovation on one's own. We will make innovations in our products, but that does not mean we have to do all the work by ourselves. As a matter of fact, it would be better if we get the work done by working together," said Wang.

Chen said the economic multiplier effect will be further improved.

"I am sure through the application of high-end and new technologies, and more practices, China's high-end manufacturing capabilities will be further upgraded," he said.