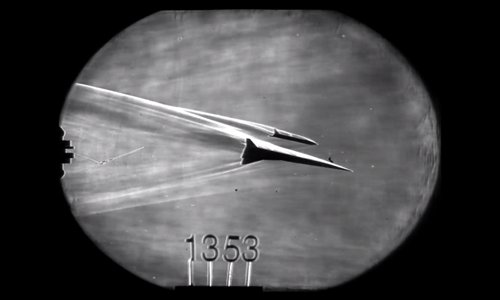 A second-stage aircraft detaches from the first-stage aircraft in a wind tunnel experiment of a Chinese space aircraft project. (Photo/Screenshot from the WeChat account of Chinese Academy of Aerospace and Aerodynamics)

China recently made an important breakthrough in developing its own space plane, a genre of aircraft that is expected to become a crucial weapon in the future, a state-owned research institute said.

The First Research Institute of the Chinese Academy of Aerospace and Aerodynamics successfully conducted a wind tunnel experiment, in which the second-stage aircraft freely detached from the first-stage aircraft of a two-stage-to-orbit (TSTO) space plane, according to a statement the academy released on its WeChat account on Monday.

TSTO means the space plane consists of two aircraft, with the first stage carrying the second stage, a military expert who asked not to be named told the Global Times on Tuesday,

The first stage will provide power to the space plane upon takeoff, and when it reaches a certain height and speed, the second stage will detach from it and power itself further into space, as the first stage will land just like a normal plane, the expert said.

When detaching, there is very strong and complicated flow distribution that could affect the flight of the aircraft, so the two stages must be separated fast and safely, the statement said.

The experiment solved multiple technical difficulties and set up a universal wind tunnel experiment protocol, providing an advanced method to develop future space planes, the statement said. With the successful development of technologies like scramjet engines, technical research has gone past the concept stage, it said.

Space plane is a crucial weapon of the future and represents the trend of integrating aviation and space technologies, the academy said.

Many countries have been developing space planes, including the US with its X-37B, which many military observers claim is a prototype space fighter.

A space plane can be used for reconnaissance, anti-satellite, anti-ballistic missile and ground attacks if used as a weapon, the military expert said, noting that it can also send satellites and astronauts into space at a lower cost than rockets, because it is reusable and uses standard airports.

China unveiled the Tengyun Project in 2016, which is planning the first test flight for the Chinese space plane in 2030, Beijing-based Science and Technology Daily reported in December 2016.