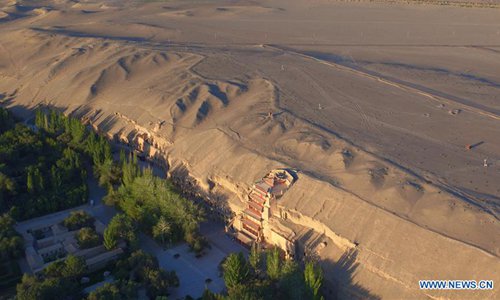 As the climate in Northwest China gets warmer and wetter, the Mogao Grottoes in Dunhuang, Gansu Province have deteriorated with changes in temperature and humidity, challenging scientists seeking to protect the ancient remains.

Residents told the Global Times Thursday that they were worried that the grottoes would disappear faster than they expected and scientists said they were desperately trying to protect and repair the important relics.

The more than 1,000-year-old Mogao Grottoes of 735 caves, a UNESCO World Cultural Heritage site, are suffering the effects of cliff deterioration, weathering and human activity.

According to scientific studies, the Northwest China climate is getting warmer and wetter.

The arid climate once preserved the grottoes for thousands of years. But this year the grottoes were temporarily closed to tourists twice in July due to heavy rain and grass from the Gobi Desert growing around the grottoes, said a worried resident surnamed Zhang in Dunhuang.

Rainfall in the Mogao Grottoes has increased in recent years and the surrounding Gobi has obviously turned green, posing a threat to the grottoes, said Guo Qinglin, director of the protection department of Dunhuang Academy.

It was difficult to predict how much climate change damages the murals, Guo said.

Challenged by the rain, the Dunhuang Academy and the government have established an environment monitoring and warning system and made China's first laboratory with cabins for tests and simulations integrated with real-time monitor technology, big data analysis and cloud networking to develop materials to protect the murals, Guo said.

Scientists have tested the laboratory and plan to officially use it in the end of this year, Guo noted.

Beyond developing materials to block degradation in the murals, monitoring the grottoes' condition in real time is also important, said Wang Xiaowei, director of the monitoring department of the academy in a previous interview.

"The rain caused the humidity of the grottoes to rise and if the monitor finds the relative humidity exceeds about 60 percent, the grottoes will be closed temporarily," said Wang.

"We're planning to carry out relevant research based on the existing environment monitoring and warning system with experts to figure out how to protect and repair the caves," Guo said.

Scientists are also trying to digitize the important relics before they are gone forever.

On the site e-dunhuang.com, anyone from around the world can view 360-degree panoramas of the caves and virtually navigate around in high resolution without actually setting foot in the caves.