Mogao Caves look beyond past to focus on cultural heritage 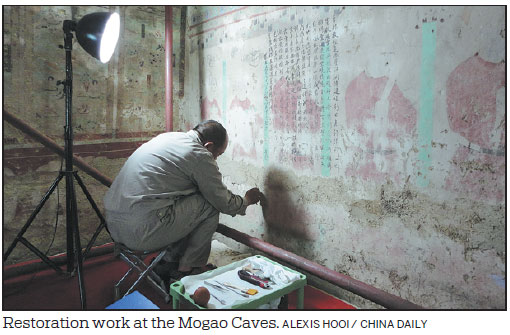 When I first visited the famous Mogao Caves in Dunhuang 10 years ago, the beauty of the ancient Buddhist art was not the most moving part of the experience.

Instead, the emptied Cave 17, known infamously as the "Library Cave" because of the priceless frescoes, sculptures, scrolls, books and other artifacts that were stolen by foreigners from at least five countries in the early 20th century, spurred me enough to call for the rightful of the treasures to China, which is now fully capable of preserving them for posterity.

The first grotto near the Silk Road oasis in Gansu province is believed to have been carved out in AD 366. In the following millennia, the site grew to become of the world's finest repositories of Buddhist art whose influence continues to be felt beyond the religious, cultural and historical fields.

The Library Cave used to contain more than 50,000 manuscripts and documents dating from AD 406. But a decade after the grotto was discovered in 1900, foreign explorers made off with the findings.

Briton Aurel Stein is said to have taken at least 7,000 complete manuscripts and 6,000 fragments, including the Diamond Sutra (the world's oldest dated, printed book), while French rival Paul Pelliot apparently stayed in the cave to choose by candlelight the most valuable works because he could read the writings.

Today, a fraction of the original pieces from the Library Cave are said to remain in China.

Many people may also be upset by these events, especially when they see Mogao for themselves. But when I returned to the iconic site in July, most of the tourists and staff members exhibited none of the anger, bitterness or sense of loss stemming from the notorious looting.

Researchers at the Dunhuang Academy, which manages and studies Mogao, as well as visiting scholars from across the world drawn to the caves, seemed singularly focused on sharing its rich cultural heritage with future generations at home and abroad.

In the past few decades, through international collaborations, advanced technology and sheer passion, the academy has successfully preserved Mogao's relics.

It is suitably proud of those achievements and is even applying its expertise to heritage sites in developing countries such as Cambodia's Angkor Wat temple. Academy researchers have traveled to India, Uzbekistan, Tajikistan and Afghanistan to enhance more cultural interaction and understanding. The academy also uses state-of-the-art imaging and archiving technology in a major digitization move to allow the world to enjoy the art of Mogao. Nearly half of the 492 caves containing important Buddhist artifacts have been digitally archived, with 30 cave renderings made available online.

Its scholars are also studying how the historic role that Dunhuang played in the ancient Silk Road as a hub of East-West economic and cultural exchange continues to be relevant today, in line with the China-proposed Belt and Road Initiative global infrastructure and development drive.

All these are a clear reflection of how Mogao has looked beyond the ravages of time and damage it suffered, to build bridges of common understanding and share its cultural heritage with the world.