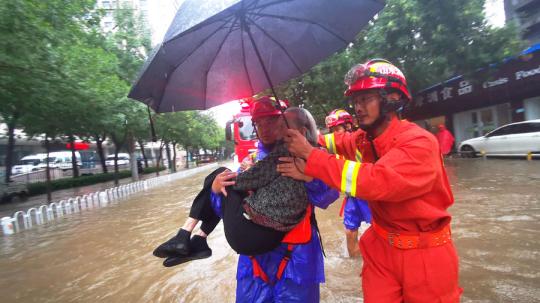 Rescuers carry an elderly woman to safety after she was stranded in a vehicle in a flooded street in Binzhou, Shandong province, on Sunday. [Photo/Xinhua]

Typhoon Lekima, which made landfall in Zhejiang province on Saturday, leaving 32 people dead and 16 missing, is moving northward, local authorities said on Sunday.

Lekima has affected 6.51 million people, with nearly 1.5 million of them relocated to safer places in Shanghai and the provinces of Zhejiang, Jiangsu, Anhui, Shandong and Fujian as of 5 pm on Sunday, the Ministry of Emergency Management said.

More than 30,000 firefighters in Zhejiang, Shanghai and Jiangsu have assisted in the rescue and relocation of 6,257 people in distress, the ministry said.

According to local authorities in Zhejiang, more than 5.35 million people in the province were affected, with 185,000 hectares of crops damaged. Economic losses are estimated at 15.75 billion yuan ($2.23 billion).