War hero, 95, a model for all, president says 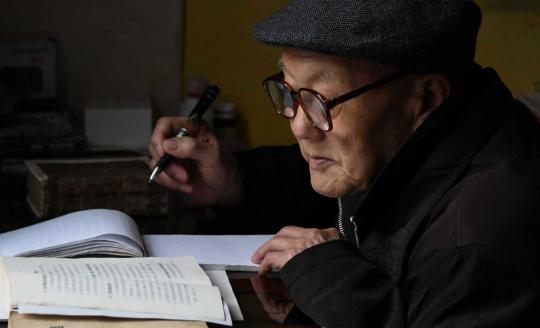 In a written instruction released on Friday, President Xi Jinping called on society to carry forward the spirit and dedication of 95-year-old war hero Zhang Fuqing as China forges ahead in the new era.

Xi is also general secretary of the Communist Party of China Central Committee and chairman of the Central Military Commission.

Zhang, a native of Shaanxi province, behaved courageously in the Liberation War in 1948, repeatedly achieving military glory. He retired from active service in 1955.

Over the following decades, he kept his battle achievements a secret, even from his children. His story was made public at the end of last year, as information about veterans nationwide was being collected by the authorities.

Xi hailed Zhang's deeds, saying the elderly hero hid them for more than 60 years and stayed true to his original aspirations. As a soldier, Zhang defended the country; as a civilian, he works for the people's well-being, Xi said.

Zhang lives a life of simplicity, purity and indifference to fame and fortune, serving as a role model for military officers, rank-and-file soldiers and veterans across the country, Xi said.

Zhang, a member of the CPC, was a soldier of Brigade 359 of the Northwest Field Army, one of the main forces of the Chinese People's Liberation Army during the Liberation War between 1945 and 1949.

He was honored by the Northwest Field Army several times for performing meritorious deeds as he braved enemy fire. He was twice given the honorary title of Combat Hero. When he retired from the PLA, Zhang chose to work in the poverty-stricken mountainous areas in Laifeng, a remote county in Hubei province. He dedicated his life to the people, holding posts ranging from community-level government official to deputy manager of a local bank.

His political beliefs as a Party member supported him during the war period and in serving the people in peacetime, with indifference to fame and wealth, Zhang told Xinhua News Agency. He said he has been fulfilling the oath that he had sworn when joining the Party, and that he doesn't deserve special recognition for his achievements, since what he did was negligible compared with those who sacrificed their lives in the war. His left leg was amputated seven years ago because of an illness, but Zhang stood up again on his prosthesis.

He said he doesn't want to be a burden for others, and wants his children to work wholeheartedly for the Party and the people.