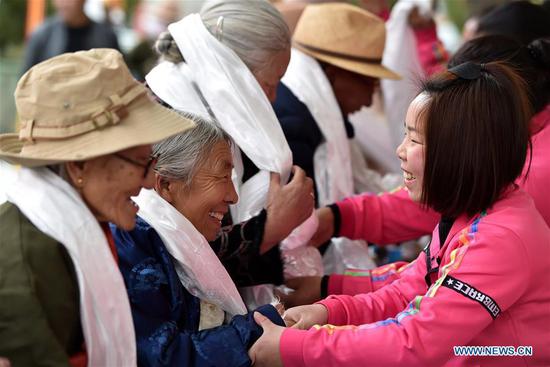 Young people present hada, a white ceremonial silk scarf, to the elderly in an event to celebrate the 60th anniversary of democratic reforms in Tibet, at a community in Lhasa, capital of southwest China's Tibet Autonomous Region, March 23, 2019. (Xinhua/Chogo)

The central government has continued to increase eco-compensation for Tibet in return for its cost for protecting the eco-environment and the consequent losses in development opportunities.

The white paper said that since 2001, the central government has paid 31.6 billion yuan (4.71 billion U.S. dollars) in eco-compensation to the autonomous region for protecting forests, grassland, wetland, and key ecological reserves.

Currently the autonomous region has 16.02 million ha of forests (including woodland, shrubland and other types of forestland), with a forest coverage rate of 12.14 percent and a growing forest stock of 2.28 billion cubic meters, according to the document.