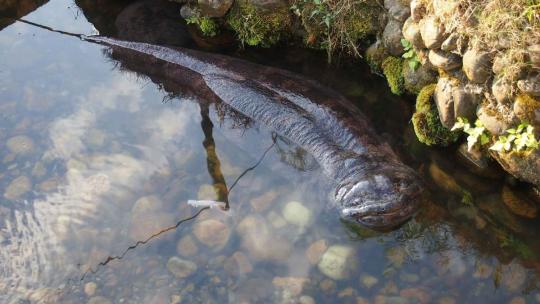 A research paper, published online in the journal Ecology and Evolution, depicts a relatively intact distribution map of Chinese giant salamander clades - groups of living organisms that include all the descendants sharing specific genetic traits of a common ancestor - and suggests that the release of giant salamanders back into the wild should match their genetic differences.

The scientists involved in the study collected 320 wild samples from 33 localities, covering most of the Chinese giant salamander's native distribution range. The seven clades were discovered through wide geographic sampling and sequence alignment of mitochondrial and nuclear DNA.

Liang Zhiqiang, the paper's lead author and an associate researcher at the Hunan Fisheries Science Institute, said the study filled in gaps in the genetic diversity of wild Chinese giant salamanders in six provinces, including Hunan and Jiangxi, and provided much-needed genetic background information for conservation efforts.

"It is rare that there are three clades in one single area, and the finding can help improve monitoring programs and develop conservation strategies for the species in Zhangjiajie," Liang said.

"Although the release of captive reared individuals into the wild could have a positive effect on giant salamanders, negative effects are also possible. For instance, the introduction of individuals with nonnative genotypes might lead to loss of local adaptations and native genetic variability.

"Genetic testing is needed before releasing giant salamanders into the wild to ensure that they are part of the local clades."

Since 2002, the National Giant Salamander Nature Reserve in Zhangjiajie has released more than 20,000 farm-reared baby salamanders into the wild. Microchips implanted under the skin of the released salamanders record their gender, when they were bred, and genetic information.

"The chips are equivalent to the ID cards of the giant salamanders, which can find matches in the gene storehouse to help guarantee the genetic purity of the local wild giant salamander population," said Deng Zhiyong, head of the reserve's protection section.