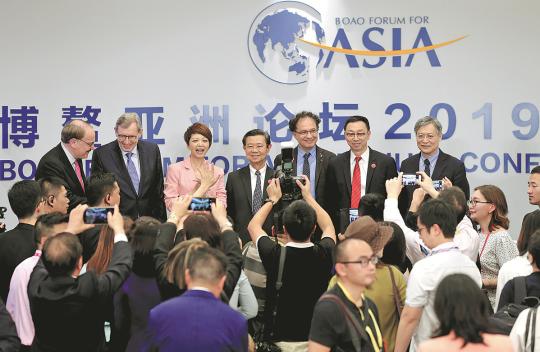 Guests take photos after attending a branch symposium of the annual Boao Forum for Asia in Hainan Province, on Tuesday. The symposium previewed this year's global economy. (Photo by Wang Zhuangfei/China Daily)

China called on Asian economies to seek greater economic integration to boost regional competitiveness so as to better address challenges amid rising protectionism and unilateralism.

"Against the backdrop of economic uncertainties, Asian economies maintained a sound momentum of steady growth, contributing to around 60 percent of global GDP growth over the past decade or so," said Li Baodong, secretary-general of the Boao Forum for Asia, at a news conference on Tuesday in Boao, Hai-nan province.

Uncertainties mainly arise from protectionism and potential financial tightening, leading economists and experts said prior to the forum, which will officially begin on Thursday.

"To drive the regional economy to be more balanced and healthy, Asian economies should unite to promote multilateralism and globalization," he said.

Li made the remarks after three annual reports — Progress of Asian Economic Integration, Asian Competitiveness, and Development of Emerging Economies — were released in Boao.

They highlighted that despite economic headwinds, Asian economies have witnessed a sound and steady improvement in competitiveness and have been actively promoting the process of integration.

According to the reports, up 17 new agreements to facilitate economic cooperation were signed in 2017 and 2018, and another 70 bilateral agreements are currently being negotiated. All the 37 Asian economies listed in the reports scored higher year-on-year in terms of competitiveness.

Long Yongtu, former vice-minister of the then Ministry of Foreign Trade and Economic Cooperation, pointed out that China has taken the lead in opening wider to make bigger contributions to economic globalization.

A case in point is that the country's Belt and Road Initiative has vigorously furthered the economic integration of Asia over the past six years.

"The BRI has had a positive impact on improving the competitiveness of Asian economies," said Zhang Huanbo, a researcher at the China Center for International Economic Exchanges.

Such effects are especially clear in how the initiative has improved infrastructure, overall economic strength and social development of countries involved in the BRI, Zhang said. He added that it has boosted cooperation among governments, enterprises and peoples in countries involved, thus facilitating and liberalizing cross-border trade and investment across the region.

The BRI has the potential to fill large infrastructure investment gaps among members of the Association of Southeast Asian Nations, according to the Asian Financial Development Report on Infrastructure Finance. It was the first time that the forum launched a report on finance.

The BRI "can be impactful", the report noted, as it can leverage financial resources of nearly 70 economies, including China, to create new affordable financing for infrastructure construction. Such positive progress will be further fueled by the BRI's ability to guide private investment, it added.