Decades of effort push back desert 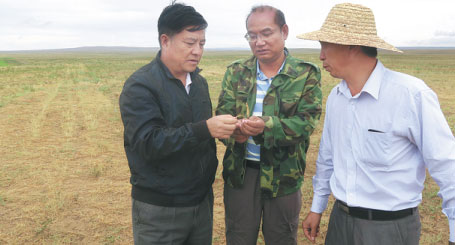 Jiang Qi (middle) introduces his work to visitors on a pasture he and his colleagues helped restore in Yanchi county, Ningxia Hui autonomous region. (Photo/CHINA DAILY)

Surrounded by three deserts, northwestern China's Ningxia Hui autonomous region has long been plagued by sandstorms, but decades of effort by generations of scientists have helped shrink the area affected by desertification.

Jiang Qi, a 53-year-old researcher from the Ningxia Academy of Agriculture and Forestry Sciences, in Yinchuan, the regional capital, has been part of that effort since the mid-1980s.

He said his predecessors had worked hard to cultivate areas of greenery. Nowadays, in addition to environmental concerns, researchers had to find ways to improve the livelihoods of local people.

With the Tengger Desert to the west, the Ulan Buh Desert to the north, and the Mu Us Desert to the east, 1.21 million hectares of Ningxia was affected by wind-borne sand in 1999, but the situation has improved steadily since then, making Ningxia the first region in the country to achieve a decrease in desertification, according to a CCTV report. The latest figures from the National Forestry and Grassland Administration show the area affected by wind-borne sand had shrunk to 1.12 million hectares by 2014.

Through decades of hard work, degraded grassland areas had shrunk by 420,000 hectares by last year, and areas affected by desertification by 140,000 hectares.

"Taking achievements of the last generation as a steppingstone, we adopted a new land management method, which combines trees with crops and livestock on the same piece of land," Jiang said. "It can both increase income for farmers and protect ecology and environment."

One example is planting shrubs together with corn and grass. "We need to combine the three in a most profitable and workable way," he said. "Water resources and arable land are scarce in Ningxia."

The method won the second prize in the 2008 National Science and Technology Progress Award and has been widely used across Ningxia.

Jiang began work at the academy after graduating with a forestry degree from Northwest Agriculture and Forestry University in Xianyang, Shaanxi province, in 1986.

During the early years, he and his team members, usually seven people, worked in the desert for at least 20 days a month.

"Researchers are barely seen sitting in the office," he said. "They are working in different experimental fields nearly all year round."

Life was arduous during the field work. Transportation was inconvenient, the food lacked variety and housing was shabby.

"In the 1960s, my teachers, also researchers like me, lived in a shabby hut and ate dry food," Jiang said. "It became better in 1990s: we lived in villagers' houses or a two-floor building owned by our academy and had vegetables to eat."

During the day they planted and experimented in the desert and at night they taught local farmers skills. In a decade, his team planted trees on 56,000 hectares of land and grew pasture on 130,000 hectares.

Due to the complexities of his work, Jiang's wife never really understood his job. But that changed in 2006 when she had a vacation at his research field in Ningxia's Gaoshawo county.

"She just encountered the sandstorms during the vacation," he said. "Everything and everyone was wrapped in sand. She felt sad when seeing my workplace in such a tough condition. After that she understood my job and me better."

Jiang, now director of the academy's desertification control department, said the road is still long and the burden remains heavy, because there is still a great deal of land affected by desertification in Ningxia and across the country.

"It is not easy work because it can take as long as a decade for a sand-control project to see outcomes," he said. "That work will be handed down to the next generation."