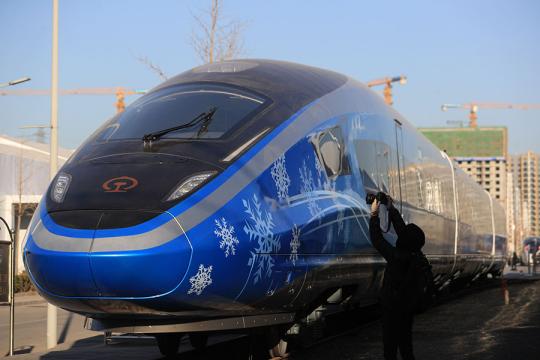 The new line – considered an important project for the 2022 Beijing Winter Olympic Games – will be the world's first intelligent, high-speed railway on which trains reach speeds of 350 kilometers per hour.

The line's trains will be the first self-driving vehicles of their kind capable of reaching these speeds.

Intelligent robots, which can not only carry luggage but also offer self-service navigation, will be deployed across the line.

Sun Chunhui, chief engineer of the new line, said that for the first time, the whole railway line will be equipped with intelligent substations, which can monitor the status of running trains in real time and deal with malfunctions online, improving the stability and safety of train operation.

The bullet trains set to run on the line began trial operations on the Beijing-Shenyang high-speed railway in 2018, using China's Beidou Navigation Satellite System – the first time the system has been applied to trains.

Linking Beijing North Railway Station and Zhangjiakou city, Hebei province, the railway is 174 kilometers long. The laying of track is expected to be completed in the first half of 2019, and tests and adjustment on the line will be launched in the second half.

The railway will begin commercial operations by the end of this year, cutting Beijing-Zhangjiakou journey times to 50 minutes.