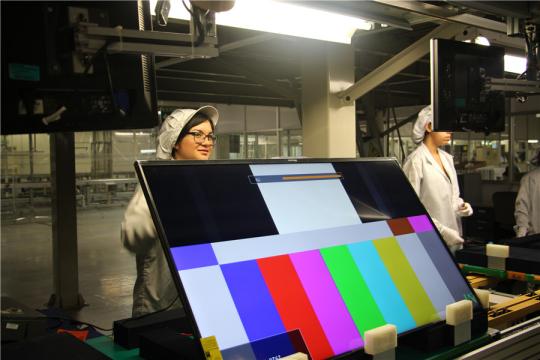 Slowdown-scarred and growth-seeking Chinese television manufacturers are ushering in an era of premium and intelligent TVs.

Industry insiders said the Chinese home appliance market is almost saturated, and the competition among major TV makers will be fiercer with technological advancements and innovation.

"Laser TV has proven to be the ultimate way to watch TV at home, and that has inspired us to push even harder across our full range of products debuting this year," said David Gold, deputy general manager and vice-president of sales at Hisense USA Corp, at CES.

"We've reshaped the luxury TV market with Laser TV, and our 2019 products with ULED will reshape every other TV category with stunning picture quality and incredible design that's premium inside and out," said Gold.

Hisense also claimed a more than 50 percent share in the 80-inch and above screen laser TV market in 2018.

Hisense said it is abandoning its strategy of winning market share through low-price products. Instead, it has shifted its emphasis to producing the "best-quality products at competitive prices", said Liu Hongxin, president of Hisense Group.

"The high-end products have played a key role in the overseas development of our company."

The company's self-developed ULED technology, which enhances color, contrast, resolution and motion with a combination of advanced hardware and software, and outstanding local supply chains, have helped Hisense to give effective and timely feedback to the market, said Liu.

Opportunities and challenges will coexist in the TV industry this year, said Peng Jianfeng, deputy secretary-general of the China Video Industry Association.

"Global sales of OTT TVs will amount to 260 million units this year, with revenue from advertisements reaching 7 billion yuan to 9 billion yuan. Moreover, the deployment of 5G technology will make the transmission of 8K content possible, as well as boosting the development of the internet of things," Peng said.

However, he noted the TV industry faces challenges in the form of slower economic growth, excess capacity and the loss of TV users.

Skyworth Group is banking on organic light-emitting diode (OLED) TVs, as such high-end technology has helped Skyworth to conquer the domestic TV market.

Skyworth has been producing OLED TVs since 2014. Statistics from AVC showed sales of Skyworth OLED TV accounted for 46 percent of total OLED sales in the Chinese market in 2017, followed by LG (16 percent) and Sony (14.9 percent).

Skyworth said it will focus on developing artificial intelligence and internet of things technologies, and will open its resources for intelligent system sharing.

Panel manufacturing capacity will continue to increase this year, meaning panel prices are expected to fall, which will alleviate some cost pressures on TV companies, said Zhu Yuanyuan, general manager of the TV unit at AVC.

Shenzhen-based electronics manufacturer Konka Group Co Ltd will focus on AI, 8K and 5G technologies to create more opportunities this year, and will increase investment in research and development, said Chang Dongfa, vice-president of the company.