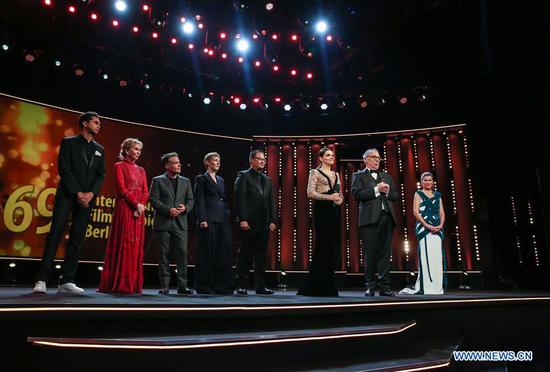 The 69th Berlin International Film Festival, also known as the Berlinale, kicked off on Thursday with the screening of "The Kindness of Strangers", a film by Danish writer/director Lone Scherfig.

"The Kindness of Strangers" is among the 17 films competing for the Golden and Silver Bear awards this year. Scherfig is one of the 7 female directors whose works are shown at the fesitval.

The film, a co-production by Denmark, Canada, Sweden, Germany and France, narrates a modern tale of ordinary people struggling to find help, hope and love.

Set in New York City, the story begins when a young mother takes her two sons to flee her abusive husband. When they end up on the street in despair, the owner of a Russian restaurant offers them warmth and shelter. The heroine also gets help from other strangers who meet each other and discover liberation and hope.

Scherfig said at the press conference following the premiere that she felt an urgent need to respond to the current political and social turmoil around the globe in a positive way.

"I thought it would make sense ... to make a film that has light and hopefully leaves the audience with a sense of not just hope but also community," she said.