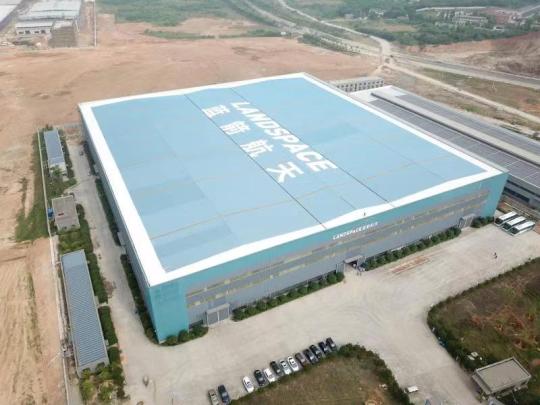 Construction for LandSpace got underway earlier this month. (Photo provided to China Daily)

The first privately owned carrier rocket factory in China, and the largest of its kind in Asia, recently began operations and is set to build what is expected to be the country's biggest privately designed rocket.

Zhang Changwu, founder and CEO of LandSpace, a rocket-maker in Beijing, said on Thursday that the factory in Huzhou, Zhejiang province, is currently being used to conduct technical tests of the company's newly developed TQ-12 rocket engine.

He said production of the engine and the ZQ 2 liquid-propellant carrier rocket will begin in 2019 at the factory, adding that the ZQ 2, which will be propelled by the TQ-12, is scheduled to carry out its first flight in 2020. Except for the Huzhou facility, all carrier rocket factories in China belong to State-owned space entities such as China Aerospace Science and Technology Corp.

According to publicly available information, before LandSpace there was only one private rocket-maker with its own production facility in Asia－Japan's Interstellar Technologies. The Japanese company's plant is in Taiki, Hokkaido, and is much smaller than the Huzhou factory.

Zhang said his factory now occupies about 4.7 hectares and will be expanded to 8 hectares. The facility will be able to produce about 15 ZQ 2 rockets and 200 TQ-12 engines starting in 2022, he said.

Zhang Chen, a senior manager at LandSpace, said the reasons behind the company setting up a factory in Huzhou include the fact that the city has been a testing base for State-owned space contractors for a long time. The local government is supportive of private businesses and is eager to upgrade local industries, and it is easy to find component suppliers in neighboring regions.

Zhang Changwu said the company now focuses on the development of the ZQ 2, calling it "the largest and most powerful carrier rocket designed and built by a private Chinese rocket company".

The 48.8-m ZQ 2 will have a diameter of 3.35 m, the same as those in most of China's Long March rocket series, and a liftoff weight of 216 metric tons. It will be capable of placing a 1.8-ton payload into sun-synchronous orbit 500 kilometers above the earth or a 4-ton spacecraft into a low-Earth orbit with an altitude of 200 km, LandSpace said.

President Xi Jinping has personally requested that the nation's long-insulated space industry open its doors to private participants and take advantage of their participation to boost sustainable growth.

There are nearly 10 private rocket firms in China and all of them were founded over the past three years. Of those, LandSpace, OneSpace and i-Space, all based in Beijing, are the leaders when it comes to research and production capabilities and funding. The three companies have all conducted launch missions.